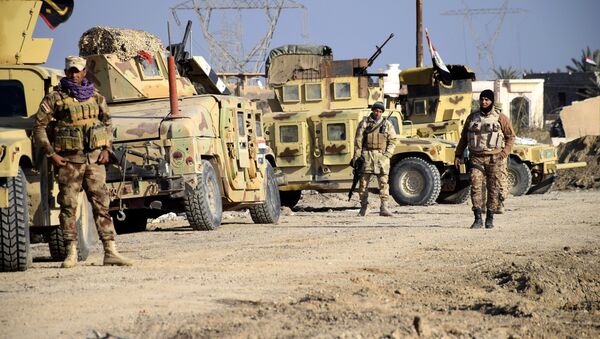 Iraqi security forces continued to gain ground in the western city of Ramadi in Anbar province and expect to dislodge Daesh militants from the strategic city within days, local television reported on Wednesday.

On Tuesday, the army won back the al-Dubat neighborhood and al-Jirayshi district in the South of Ramadi city.

"In the coming days will be announced the good news of the complete liberation of Ramadi," Iraqia TV quoted the army chief of staff Lt. General Othman al-Ghanemi as saying on Wednesday.

Iraqi Army Wins Back 60 Percent of Ramadi City
If Ramadi is captured, it will be the second major city after Tikrit to be retaken from Islamic State in Iraq. It would provide a major psychological boost to Iraqi security forces after the militant group seized a third of Iraq last year.

Battlefield sources announced on Tuesday that the Iraqi Army troops had launched a joint massive operation against the jihadists’ fortified positions in the central part of the city.

"The Iraqi army stormed the first defense lines of the ISIL [Daesh] terrorists in the city center and is now engaged in a heavy street battle with the Takfiri terrorists," the sources said.

Daesh militants are still in control in Mosul, Iraq's second largest city, and Fallujah, which lies between Ramadi and Baghdad, as well as large areas of Syria — the core of what it has declared to be a caliphate.