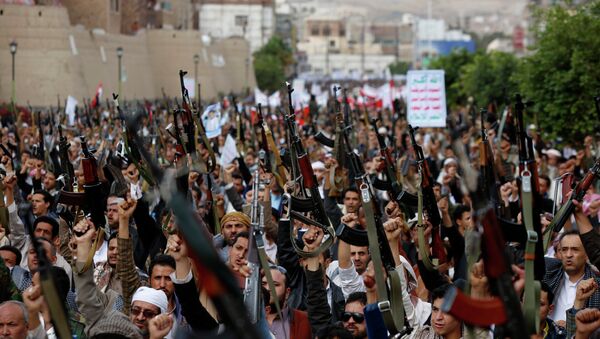 The of 2015 in the Middle East was the year not only of the civil war in Syria, but also of severe conflict in Yemen, resulted in thousands of casualties, with over 5,800 people killed since mid-March.

The rebels have overtaken large areas of the country, including the capital Sanaa, forcing President Abd Rabbuh Mansur Hadi to flee and later, request military assistance from the Arab League, which ultimately resulted in a Saudi Arabia-led operation against Houthi positions in Yemen.

According to UN data, the ongoing conflict has resulted in thousands of casualties, with over 5,800 people killed since mid-March, about half of them civilians.

The modern day armed conflict in Yemen between Shiite rebels and government forces dates back to 2004, when the killing of the group’s founder, Hussein Badreddin Houthi, incited a major protest movement.

Since then, the Houthis, also known as Ansar Allah (Supporters of God), have virtually turned into the main opposition force in Yemen, leading the 2011 uprising against Saleh, part of broader Middle Eastern Arab Spring protests.

Mass Shiite protests resumed in mid-August 2014, with the protesters calling for economic and political reforms, as well as demanding the government’s resignation.

Death Toll in Yemeni Conflict Tops 6,000, Some 15,000 Injured
In January 2015, the situation in Yemen began to deteriorate dramatically. On January 17, the Houthis abducted Ahmad Awad Bin Mubarak, the president's chief of staff, hours before he was due to unveil a draft of the country’s new Constitution at a presidential meeting. Two days later, a group of Shiite rebels attacked Prime Minister Khaled Bahah's convoy in Sanaa.

In a move that stunned the Arab world, armed fighters from the Ansar Allah group took control of the presidential palace in the Yemeni capital on January 20. Following the de-facto seizure of the Yemeni capital, Hadi agreed to a deal with the rebels, promising that the opposition would be involved in the running of the country. He also tendered his resignation to parliament on January 22, which was withdrawn a month later.

In his letter to the nation’s legislature, Hadi called on ministers to start working with him from the port city of Aden, to where he moved following weeks of house arrest by Shiite militia. The exiled president declared the Houthi power grab illegal, insisting he was still a legitimate leader.

In late March, Houthis made further military advances when they seized Taez, Yemen's third largest city, which is located on the road to Aden.

With the regions adjacent to Aden becoming an arena for hostilities between army units loyal to the president and Houthi supporters, Hadi asked the Arab League for military support in late March, following which a Saudi Arabia-led coalition launched airstrikes against Houthi positions.

A Saudi-led military operation involving mainly Gulf countries was launched on March 26 to roll back the Houthi insurgency in Yemen, following Hadi’s plea for an intervention.

Bahrain, Egypt, Jordan, Kuwait, Morocco, Qatar, Sudan and the United Arab Emirates have dispatched fighter jets to carry out airstrikes against the positions of Houthis and their allies. Egypt and Saudi Arabia have also provided warships to support the operation.

Yemeni President Hadi Succeeds Former Leader Saleh as Ruling Party Chairman
Somalia has allowed the coalition to use its airspace and territorial waters in the course of the military campaign.

The UK Defense Ministry, in a July letter to the House of Lords on the amount of assistance being provided by the United Kingdom to Riyadh in its fight against Houthi rebels in Yemen, said that the country was providing precision-guided weapons and technical support to the Saudi Air Force "as part of pre-existing arrangements."

The United States, a major supplier of weaponry to Saudi Arabia, has not joined in the military actions in Yemen directly but has been providing logistical and intelligence support for the military operation.

The US backing of the Yemen airstrikes raised concerns among rights groups. Amnesty International claims the Saudi Arabian airstrikes in Yemen have killed and maimed dozens of innocent civilians using US supplied bombs, in violation of international law.

The Saudi-led air campaign against the Houthis has exacerbated the humanitarian crisis in Yemen, which affects some 20 million people or 80 percent of the population, according to the UN aid agency UNICEF. Other international humanitarian agencies working in Yemen have also been complaining about disruptions in food, water and electricity supplies across the entire country.

Arab Coalition to Suspend Hostilities in Yemen for 7 Days
Assessing the dire humanitarian impact of the airstrikes, UN High Commissioner for Human Rights Zeid Raad Hussein told the UN Security Council on December 22 that the Saudi-led coalition military campaign in Yemen appeared to be responsible for a "disproportionate amount" of attacks on civilian areas.

The escalation of hostilities prompted a number of states, including Russia, China and India, to immediately start pulling out civilians, both their citizens and foreign nationals, from conflict zones in Yemen. Since April, Moscow has also been operating a medical service in the Arab country as part of international humanitarian efforts to alleviate the crisis.

Although the Saudi government declared an end to its military operation, called Decisive Storm, in late April and claiming it would be replaced by Operation Restoring Hope, focused on fostering a political dialogue between conflicting sides, the airstrikes have continued. They resumed after a five-day humanitarian pause in May, during which international agencies assisted local residents and evacuated the injured.

Allegations of Houthis Receiving Outside Support

The Houthis’ swift territorial advances and partial control over government institutions raised questions about whether or not they were able to achieve these results independently, relying exclusively on their own resources.

Officials from Yemen, Saudi Arabia and a number of other nations have accused Tehran of supplying weapons to the Houthis, as Iran has the largest Shia majority. Tehran has repeatedly refuted the allegations.

The stand-off between Iran and the Persian Gulf monarchies over the Yemeni crisis came to a head on May 12, when the vessel Iran Shahed, carrying food, medicine and basic supplies collected by the Iranian Red Crescent Society, departed for Yemen's Red Sea port of Hodaida.

Saudi-Led Coalition Airstrikes Destroy Yemen School System - Rights Group
Following the ship’s departure, Gen. Ahmed Asiri, a spokesman for the Saudi-led coalition, said the Iranian ship had been warned that access to Yemeni ports would be denied, instructing it instead to redirect to the UN aid distribution center in Djibouti. After days of negotiations, the Iranian ship unloaded its cargo in the port of Djibouti in the Horn of Africa on May 23.

Commenting on the accusations of the Islamic republic making munition deliveries to Houthis, a senior Iranian diplomat said in an exclusive interview with Sputnik that Iran had never supplied arms to Yemen as the crisis-hit country had massive stockpiles of weaponry and did not need additional shipments from abroad.

"Those who are familiar with the situation in Yemen realize that sending weapons to this country is a utopia. It seems as if the countries that accuse Iran are trying to cover up their mistakes and failures in this issue while shifting the responsibility on to other countries in the region," Mohamad Alibak, head of the Iranian Foreign Ministry's Second Department on the Middle East and North Africa, said in late May.

Long and Winding Road to Peace

Amid a mounting toll of civilian deaths in Yemen, the UN high commissioner for human rights on January 9, called for all parties to the conflict to take steps toward a peace process.

"I urge all parties in Yemen to renounce the use of violence to avoid [the] further loss of innocent lives and take concrete steps towards the immediate and effective implementation of the peace and partnership agreement," Hussein said in a statement.

The plea came after a series of bomb attacks left dozens of people dead in Yemen.

The early 2015 tragedies included the January 4 bomb explosion that occurred when Houthi movement members tried to defuse an explosive device near a school in the city of Dhamar, planted by Al-Qaeda in the Arabian Peninsula (AQAP). The blast claimed the lives of at least six people. Three days later, at least 37 people were killed when a car bomb detonated outside a police college in Yemen's capital of Sanaa.

A couple of days after the Arab coalition began its military operation in Yemen, Russian President Vladimir Putin stressed that Moscow would stand by the Arab Gulf countries in their attempts to resolve emerging crises in the Middle East through peaceful means and without foreign involvement.

On March 27, former Yemeni President Saleh unveiled his peaceful initiatives to resolve the situation in the country, calling on the Saudi Arabia-led international coalition, Houthi rebels, other armed formations to stop all military action. He also called for the end to the looting of public institutions and military units across the country.

The final point of his plan envisaged all sides to the Yemeni conflict returning to UN-mediated talks with the goal of resolving any existing issues and bringing the political standoff in the country to an end.

On April 14, Iran also put forward its four-point peace plan on Yemen. Iranian Foreign Minister Mohammad Javad Zarif elaborated a plan that included "hammering out a ceasefire, sending humanitarian assistance to the people affected by violence, launching an intra-Yemeni dialog, and establishing a broad-based government participated by all Yemeni factions."

The same day, the UN Security Council passed a resolution banning the sale of weapons to the Houthi rebels.

After months of diplomatic and military strains, a conference on Yemen reconciliation, convened by Saudi Arabia, began in Riyadh on May 17, involving over 400 representatives of the country’s political forces.

Afterward, a push to bring the warring parties in Yemen to the negotiating table came from neighboring Oman. The Arab monarchy has been mediating multilateral consultations between Houthis, Iran, Saudi Arabia and reportedly US diplomats to promote the peace talks that the UN has been planning to organize in Geneva, Switzerland.

The second half of July was marked by the first round of indirect reconciliation talks between the Yemeni government and Houthi rebels in Geneva. However, the negotiations proved unsuccessful, according to Yemeni Foreign Minister Riad Yassin, who blamed their collapse on the Houthi representatives’ refusal to cooperate or put forward any constructive proposals.

Yemen Peace Talks Participants Create Committee to Monitor Ceasefire Regime
In September, the Omani capital of Muscat hosted the next round of intra-Yemeni negotiations brokered by the UN. During the talks, the sides developed a seven-part plan, that stipulated an immediate ceasefire, the removal of armed troops from all cities and snap elections in the country. The Houthi envoys to the talks confirmed their adherence to the plan on October 7.

Most recently, the conflicting parties gathered in the Swiss town of Biel on December 15, seeking to establish a permanent and comprehensive ceasefire, secure improvements to the humanitarian situation in the country and pave the way to a peaceful and orderly political transition.

However, as the fragile seven-day truce in Yemen that was supposed to be in place for the period of Swiss talks failed to hold, the negotiations were postponed until January 14, giving the sides time to come up with fresh peace initiatives.