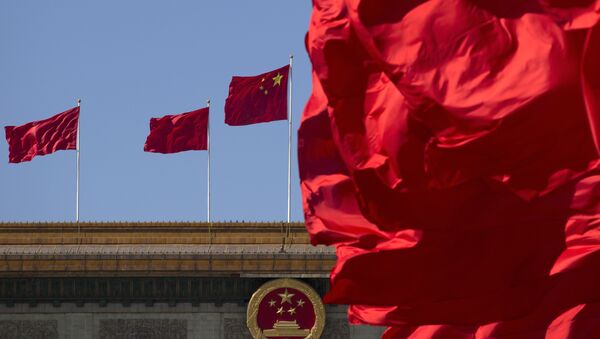 © AP Photo / Andy Wong
Subscribe
China will not become too deeply involved in the settlement of the Syrian crisis and is not going to send its military to fight there or join the Russian campaign against Daesh terrorists, a Beijing-based political analyst said on Wednesday.

China to Participate in Expanded Ministerial Meeting on Syria Nov. 14
“I don’t think China will send its military to Syria, first, because  Syria is too far away and, second, because the Chinese are not very much involved politically [in the ongoing effort to end the civil war in Syria],” Zhu Feng, deputy head of Beijing University’s Center for Strategic and International Studies, told RIA Novosti on Wednesday.

Earlier, Beijing announced that Syrian Foreign Minister Walid Muallem would pay a visit to China. The Chinese Foreign Ministry hailed the upcoming visit as part of China’s constructive effort to speed up the peace process in Syria.

Zhu Feng said that in view of the present situation in Syria, he did not expect any moves by Beijing to engage in any economic or energy projects in that country.

As to China’s closer cooperation with Russia on the Syrian issues, Zhu said that Moscow and Beijing were seeing virtually eye to eye on the ways to end the conflict.

“First, China will express its support for the antiterrorist effort being made by Russia and the government of President Bashar Assad. Secondly, the UN Security Council has already adopted a pertinent resolution on the Syrian issue and it could serve the basis of our cooperation there. And, thirdly, our positions on this issue are very close,” Zhu Feng noted.

He also emphasized that neither Beijing nor Moscow believed that the ouster of the Assad government should be seen as a precondition of a lasting political settlement in Syria.

“This is for the Syrian people to decide,” Zhu said.

China’s Foreign Ministry earlier said that representatives of the Syrian opposition would also be invited to come over to discuss the situation.

Commenting on Walid Muallem’s planned visit to Beijing, a Foreign Ministry spokesman said on Wednesday that China was ready to coordinate its mediatory effort with Russia and the US in order to bring about an early end to the civil war in Syria.