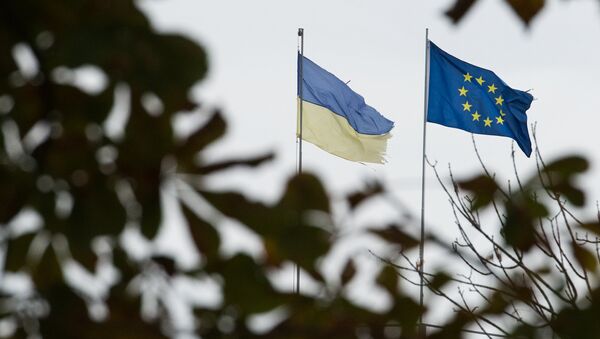 Russia will not sacrifice its own economic interests so that Kiev benefits from the free trade zone with the European Union.

EEU to Develop Response to EU-Ukraine Free Trade Area Deal by Mid-2016
MOSCOW (Sputnik) – Russia is not willing to sacrifice its own economic interests so that Kiev benefits from the free trade zone with the European Union after the Ukraine-EU Association Agreement comes into force, the Russian Foreign Ministry said in a commentary published Tuesday.

“We cannot interfere in the current leadership in Kiev, which is acting in detriment by undermining and being subservient to outside forces of its economy, this is Ukraine’s domestic affair, its ‘sovereign choice,’ as bureaucrats in Kiev and Brussels refer to it. It’s unclear why Russia has to pay for that choice. We have our own economic interests that we have no plans of sacrificing, especially to satisfy foreign ambitions,” the ministry said in the statement.

Moscow has repeatedly said that if Ukraine retained preferential trade rights within the Commonwealth of Independent States (CIS), while simultaneously opening its market to European goods, Russia’s market could be flooded by an uncontrolled flow of European goods via Ukraine.

According to the Russian Economic Development Ministry, only short-term losses for Russian businesses over the EU-Ukraine Association Agreement are estimated at $3.5 billion.