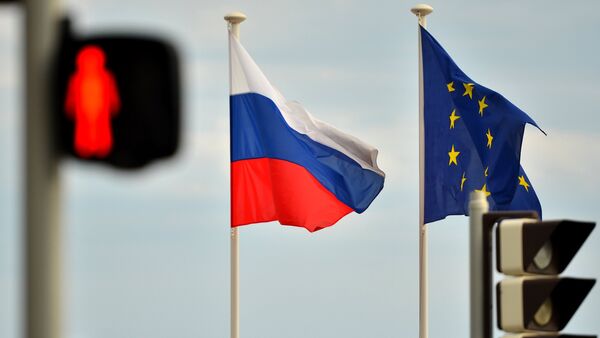 The extension of anti-Russian sanctions came into force on Tuesday and will apply until 31 July 2016.

BRUSSELS (Sputnik) — The decision to extend the European Union's economic sanctions against Russia for another six months came into force on Tuesday after it was published in the Official Journal of the European Union.

The document stipulates no changes in the sanctions package while the subparagraph of Article 9(1)  of the decision on the sanctions' introduction adopted on July 31, 2014 has been edited to read "This Decision shall apply until 31 July 2016."

On Monday, the European Union extended the economic sanctions against Russia for another six months citing failure to fully implement the Minsk peace accords.

Decision on Anti-Russia Sanctions Extension to Take Effect Tuesday
The Russian Foreign Ministry described the move as punishing Moscow for its independent policies in the global arena and stressed that linking the EU sanctions against Russia with the settlement of the conflict in eastern Ukraine is artificial and unfounded.

Relations between Russia and the European Union went downhill in 2014, when Brussels joined Washington in accusing Moscow of fueling the Ukrainian crisis, imposing several rounds of sanctions as a punitive measure.

The Russian authorities have refuted the allegations, warning that the Western sanctions are counterproductive. In response to the Western restrictive measures, Russia announced a one-year food embargo on products originating in states that imposed sanctions against it, in August 2014. The ban has since been extended for another year.