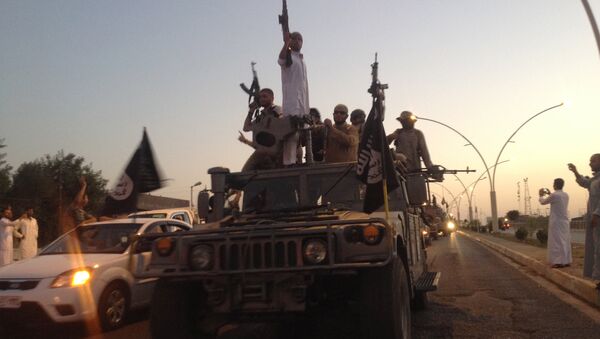 © AP Photo
Subscribe
International
India
Africa
Daesh fighters were directed to blow up mosques, torture and kill civilians, break into homes, and film their actions for the purpose of future distribution, according to Pentagon.

WASHINGTON (Sputnik) —Daesh leaders have ordered their fighters to present themselves as Iraqi military personnel and commit crimes while withdrawing from the Iraqi city of Fallujah to discredit the forces and the government, Operation Inherent Resolve spokesperson Col. Steven Warren said on Tuesday.

“The document appears to be a formal order directing ISIL’s [Islamic State] fighters to impersonate Iraqi Security Forces and to commit atrocities against the civilian population before they withdraw,” Warren told reporters.

The fighters were directed to blow up mosques, torture and kill civilians, break into homes, and film their actions for the purpose of future distribution, Warren said.

US-led Coalition Supplies Iraqi Army With Munitions for Ramadi Fight
The Pentagon spokesperson added that the Daesh document was recovered in operations around Fallujah.

Fallujah, located 42 miles west of the Iraqi capital Baghdad, is one of the largest cities in the Anbar province. In mid-July, Iraqi troops launched a major offensive to liberate Fallujah as well as Ramadi from Daesh militants.

The Islamic State, also known Daesh, is a terrorist group infamous for its atrocities which is outlawed in many countries around the world, including Russia.