Washington's Imperial Diktat: US Has 95 Percent of World's Foreign Bases 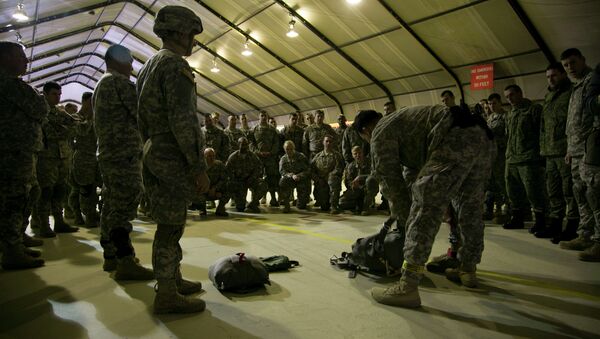 © AP Photo / Visar Kryeziu
Subscribe
The United States has over 800 US military installations around the world; overseas bases provide Washington the cover to carry out illegal actions that violate American law using the excuse that the US legislation does not apply, retired Col. Ann Wright noted in her speech in Okinawa.

By the time the USSR collapsed there were 300,000 US military personnel in Europe alone and 1,600 US bases worldwide, a retired Colonel and former US diplomat Ann Wright pointed out, adding that despite the fact that many America's bases were closed in the 1990s, nearly 250,000 US military servicemen are still deployed to installations worldwide.

"I am honored to speak at this symposium in Okinawa about the need to abolish United States military bases around the world, and particularly here in Okinawa where you have been subjected to these bases for over 70 years following World War II," Ann Wright said in her speech at Okinawa Symposium, Japan, on December 15.

NATO Continues to Provoke Russia While Daesh Runs Rampant
The former US diplomat called attention to the fact that the United States "empire" possesses over 800 military bases around the world, amounting to 95 percent of the world's foreign bases.

"Although few Americans realize it, but certainly people outside the US do, the United States likely has more bases in foreign lands than any other people, nation or empire in history," she underscored.

America's overseas bases provide Washington an opportunity to conduct illegal actions on these bases under the pretext that the US law does not work on the territory under these installations.

Guantanamo Naval Base in Cuba is a glaring example of such a policy. It is one of the US' oldest military installations. Washington has maintained control over this territory for almost 112 years in accordance with the lease agreement concluded by the US government and its puppet regime in the region long ago.

Map of US Military Bases worldwide. Who still thinks Empires no longer exist America's goal is expanse of territory pic.twitter.com/siWd5Av74r

"The sordid history of the past 14 years of the United States imprisoning 779 persons from 48 countries on a US military base in Cuba as a part of its 'global war on terror' reflects the mentality of those who govern the United States — global intervention for political or economic reasons, invasion, occupation other countries and leaving its military bases in those countries for decades," retired Col. Wright stressed.

Russian Military Bases Abroad: How Many and Where?
According to Wright, US military bases in Iraq, Afghanistan and Saudi Arabia have contributed a lot to the growing radicalization of youths in these countries. She added that while running these military installations in the Middle East, Washington in return remains silent about human rights violations committed by despotic Gulf regimes.

She highlighted that the cost to the US taxpayers for America's overseas military installations in 2014 was at least 85 billion of US dollars. Given the US longstanding military presence in Afghanistan and Iraq, America spends over 156 billion US dollars in overseas programs annually.

Expressing concerns over the threat to peace, stability and environment posed by US overseas military bases, retired Col. Wright and the Veterans for Peace delegation vowed their commitment to world peace and called for abolishing US military installations around the world.

000000
Popular comments
And the u.s says that Russia is a threat?, yeh right! The whole world can clearly see who is the real threat here and it is pretty obvious the terror state of the u.s!!!