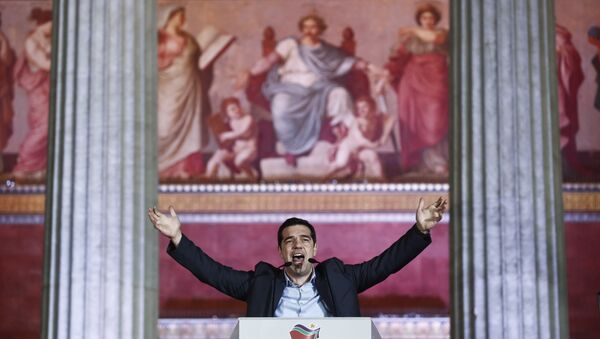 © AP Photo / Petros Giannakouris
Subscribe
The outgoing year was marked by a historic standoff between Greece’s new anti-austerity government and the country’s European lenders over its huge debt that put it on the brink of a euro exit.

MOSCOW (Sputnik), Marina Elagina — All eyes in Greece and elsewhere in Europe were on Prime Minister Alexis Tsipras, a Greek leader whose first promise after assuming office was to end the years of humiliation and suffering, and restore the nation’s dignity.

Six months after his pledge to lift the austerity brakes off Greece’s debt-ridden economy, which suffered greatly as a result of the 2008 financial crisis, Tsipras made a dramatic policy reversal, signing up to tougher austerity measures and causing the ruling party to split.

Greece entered the year 2015 with a staggering sovereign debt of 320 billion euros ($353bln), a shrinking economy, creeping jobless rates and close to a half of its population living below the poverty line.

The leftist Syriza faction, which emerged in mid-2014 as a coalition of anti-capitalist parties, harnessed the population’s rising disillusionment with the Germany-dominated European Union. Germany, an EU powerhouse, was and still remains the biggest contributor to the EU bailout program for Athens, which started in 2010.

Spain’s Elections Confirm Defeat of Austerity Policies in Europe – Tsipras
Led by 40-year-old Tsipras, Syriza soared to first place in the January 25 snap election for the first time in the history of Greek left-wing parties.

It secured 149 seats in the 300-seat Greek parliament, edging out the ruling conservative New Democracy party of Prime Minister Antonis Samaras by a 8.5-point margin. The markets greeted the news with caution – the euro fell to an 11-year low.

A speedy agreement between Syriza and the populist center-right Independent Greeks (ANEL) party gave the allies a legislative majority and allowed them to form a government led by Tsipras.

Addressing a crowd of cheering supporters in Athens, Tsipras declared the end of the catastrophic austerity and Brussels’ authoritarianism that was putting the nation on a collision course with its EU money lenders who were counting the days before the existing five-year bailout deal expired in February.

Syriza’s anti-austerity platform made it clear from the outset that a standoff between the new Greek government and its money lenders – the European Commission, the European Central Bank (ECB), and the International Monetary Fund (IMF) – was unavoidable.

The talks between creditors and Greece, represented by newly-appointed Finance Minister Yanis Varoufakis, kicked off in February, shortly after Syriza’s election triumph.

Varoufakis immediately took a hard line, rejecting the EU-proposed budget cuts and calling for debt restructuring despite the fact that the existing 2010 bailout program – totaling 240 billion euros ($246bln) – was due to expire by March.

Greece Speaks Out Against UK Exit From European Union
Weeks of bargaining ended in a trade-off on February 20 between Athens and the 18 Eurogroup nations to keep the bailout program in place for another four months under the auspices of the "troika" of international money lenders.

Athens promised not to roll back austerity measures. In exchange, the ECB agreed to maintain a cash lifeline for Greek banks to pull them back from the brink of insolvency.

As negotiations on the terms of the Greek bailout started to stall, questions began to be raised about Greece’s future in the 28-nation bloc. Were the cash-strapped Greek banks to collapse, the nation would have been at risk of being pushed out of the European Union’s single currency area and potentially the entire bloc. Some leftist hardliners within the country began to call for the return of the drachma.

The Greek bailout negotiations took a dramatic turn in June when Athens declared its intention to skip the repayment of a 300-million-euro ($337-million) loan installment, due to be repaid to the IMF at the end of the month.

Greece invoked a clause in its loan contract with its creditors that allowed it to bundle up four repayments due in June into a 1.5-billion-euro ($1.6bln) single payment it promised to pay off by the end of the month.

This was the first time since the end of World War Two that a developed country had effectively defaulted on a debt repayment to the US-based money lender. Uncertainty was heightened after the Greek government’s spokesman, Nikos Philis, said that the country could not afford the June 30 payment.

Hours before the surprise announcement, lenders presented the Greek government with a new cash-for-reform plan.

Prime Minister Tsipras declined the offer, saying it crossed too many red lines his party was unwilling to compromise on. For its part, Greece proposed several economic reforms, promising tax increases and spending cuts that it said were close to what had been demanded by the lenders.

The talks on a multibillion bailout deal heated up in June, becoming a high-stake gamble as the repayment deadline drew nearer.

At EU crunch talks on June 25, the troika of international lenders submitted their version of the bailout agreement plan to the 19-nation Eurogroup. It contained an analysis of Greek debt sustainability and set out its vision of reforms needed to get the economy back in the black.

Troika Puts More Pressure On Greece as Migrants Told to Go Home
Lenders demanded that Greece scrap its VAT discounts for islands, phase out support for poorer pensioners and lower the ceiling for military budget spending by half compared to the target set out in Greece’s offer.

Negotiations broke down on June 26 when the Greek prime minister unexpectedly announced that he would put the lenders’ bailout proposals to a referendum on July 5 to gauge voter support. The Greek parliament overwhelmingly backed this motion.

"In one night Europe suffered a major blow and goodwill was blown to the wind," Juncker said in Brussels. "Egotism, tactical games, populist games took precedence over other aspects."

After the referendum was called, Eurozone ministers refused to extend the financial lifeline to Athens past June 30. As a result, Greece missed the deadline to repay its overdue debt to the IMF and fell into arrears.

The ECB emergency funding for Greek banks was stopped. Banks were shut to avoid capital flight, and the government put capital controls in place, including a 60-euro cap on daily withdrawals from cash machines, prompting long queues outside ATMs.

Tens of thousands rallied in central Athens ahead of the vote. Prime Minister Tsipras urged Greeks to say a proud "no" to the "terrorism" and ultimatums coming from Greece’s creditors. The protests were marred by clashes between police and "no" voters in the central Syntagma square.

German, French and Italian authorities warned Greek voters that the plebiscite would effectively decide whether they wanted to be part of the single currency zone in the future.

Tsipras argued that the people’s opposition would send a signal to Brussels and give Athens a stronger mandate to broker a "better agreement."

The outcome was a resounding 61.3-percent vote against the creditors’ bailout proposals. The next week, Athens resubmitted its offer for a three-year bailout deal. Prime Minister Tsipras admitted that the updated reform program fell short of his pre-election pledge, but was an improvement on the rejected lenders’ proposal.

After 17 hours of telling creditors that the bailout plan was too tough, the Greek prime minister again surprised everyone when he accepted their offer at the Eurozone leaders’ summit on July 12.

Greece at Loggerheads With Creditors Over Latest Bailout Payment
The policy reversal after months of defiance was applauded by the European Commission, whose president emerged from the overnight marathon talks saying they finally had an "aGreekment."

"I welcome the progress and the constructive position of Greece that helps to bring back trust among euro zone partners," President of the European Council Donald Tusk said.

Greece backed down on many of the previous reform proposals in exchange for 86 billion euros ($9.4bln) worth of assistance to be provided in installments through the European Stability Mechanism (ESM), the EU bailout fund.

The agreement became the framework for a Memorandum of Understanding between Greece and its lenders. It set out a timeframe for Athens to achieve key economic targets, including a medium-term primary surplus of 3.5 percent of GDP, a return to the privatization of public assets and cutting pension costs.

The deal was approved in the Greek parliament by 229 votes to 64, with six abstentions. The prime minister had to rely on opposition votes to shore up the required support for the creditors’ reforms package.

Speaking before the lawmakers two days after the deal, Tsipras took responsibility for the accord and defended the "difficult" choice he had made, saying there was no other way-out.

"I assume responsibility for a text I do not believe in, which I signed to avoid disaster, the collapse of the banks," he said.

The sudden U-turn in the leftist party’s policy caused fury within Syriza’s ranks, prompting 38 hardline party members to vote against the deal or abstain. These included former Finance Minister Yanis Varoufakis, who stepped down at the peak of bailout talks on July 6.

Greece Fulfilling Obligations to Creditors - Prime Minister
After losing the support of dozens of his lawmakers, Tsipras reshuffled the cabinet to sideline the rebels and called a snap parliamentary election on September 20, in a bid to regain a mandate from voters. He resigned from his post on August 21 to pave the way for the vote.

Twenty-five Syriza lawmakers who opposed Tsipras’s policy broke away to form a new anti-austerity party, called Popular Unity, which failed to get into parliament.

Syriza secured a second victory, finishing on 145 seats, four less than in January, and restored the coalition with ANEL. Tspiras lauded the results of the election as a "crystal clear" mandate from voters to carry on with the reforms.

The new government, sworn in on September 23, passed a package of austerity measures on mortgage-holder security and taxes in November in exchange for a bank rescue, marking a further climb-down by the leftist party. Two more Syriza lawmakers opposed the move and were expelled, reducing the party’s parliamentary majority to just three seats.