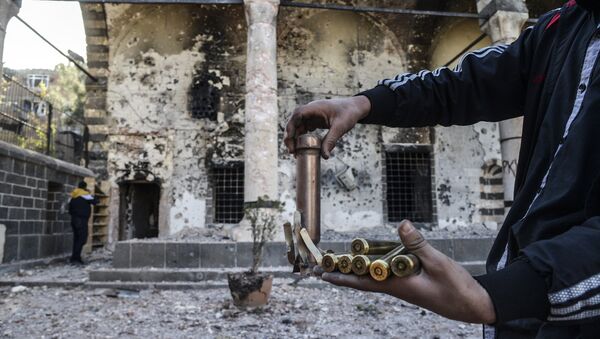 © AFP 2021 / Ilyas Akengin
Subscribe
Over a hundred Kurdish insurgents have been killed in the course of Turkish military offensive in the southeast of the country as of the operation’s fifth day, according to government security sources.

Turkey Headed Toward Civil War
Some 102 members of the Kurdistan Workers' Party (PKK) were killed in a state military operation to suppress a Kurdish independence movement uprising in southeastern Turkey as of Sunday, AFP reported citing Turkish security sources.

The death toll among Turkish servicemen is two, and five civilians have died in the operation.

The large-scale offensive against the PKK began Wednesday. Ankara deployed some 10,000 soldiers with heavy armament, including tanks, to drive PKK members out of municipalities in the province of Sirnak. The towns of Cizre and Silopi, as well as the largest city of the region, Diyarbakir, have become battlefields in the state offensive.

NATO’s Decision to Support Turkey Shows US Unable to Control Alliance
The main goal of the operation, according to Ankara, is to eliminate Kurds who seized towns, constructed barricades and dug trenches, according to AFP.

On Sunday Turkish Prime Minister Ahmet Davutoglu criticized the rebels, accusing them of trying to “unleash a civil war," and promising to "cleanse” towns populated by militant Kurds.

Some 600 demonstrators took to the streets of Istanbul on Sunday to protest the ongoing military operation, and were later dispersed by police without incident. In the eastern city of Van, the Dogan news agency reported, law enforcement used tear gas and rubber bullets to force protestors out of streets.

Inconvenient Truth: Leaked Report Proves Daesh Smuggling Oil to Turkey
Earlier on Friday, Turkish air forces conducted strikes on what were claimed to be PKK hideouts in northern Iraq, according to AFP.

The current offensive indicates a new stage in the long-lasting standoff between Turkish President Erdogan’s authority and the PKK, after a two-year truce collapsed in July.

The PKK first declared an insurgency in Turkey in 1984 to create an independent Kurdish state, and the group continues to work for regional autonomy and ordinary citizens’ rights for Kurds.