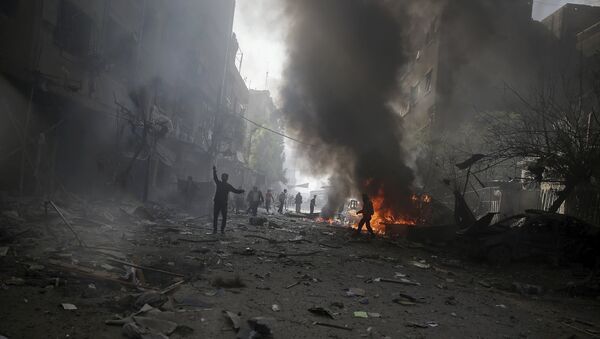 Press Secretary of the Russian President, Dmitry Peskov, spoke in an interview for the documentary "World Order" broadcasted on the Rossiya-1 TV channel saying that the scenarios of destabilization in Ukraine and Syria are similar in nature.

The press-secretary noted that such political ‘technologies’ were used to provoke the population to violently overthrow the regime.

“These red flags of such political technologies, they are visible everywhere in similar manner. And without a doubt, in many respects what we saw in Ukraine two years ago, of course, contained a lot of similar features to what we saw in the Middle East and North Africa,” Peskov said.

Noam Chomsky: Paris Attacks Are Result of Western Policies in Middle East
In addition, the press-secretary added, a certain system is imposed which is positioned as democracy.

“Maybe only now it can be assumed that the chain of ‘colored revolutions’ which in the beginning was to be confined to controlled chaos occurred in the same area, called the Great Middle East.”

He further noted that any country will fear for the controlled chaos not to turn into an absolute uncontrollable fusion process.

The press-secretary reminded that after the term ‘Great Middle East’ emerged, the region was dragged into a number of color revolutions and total chaos.

Earlier, Russian President Vladimir Putin said that the West should not try to impose their understanding of democracy on other countries.