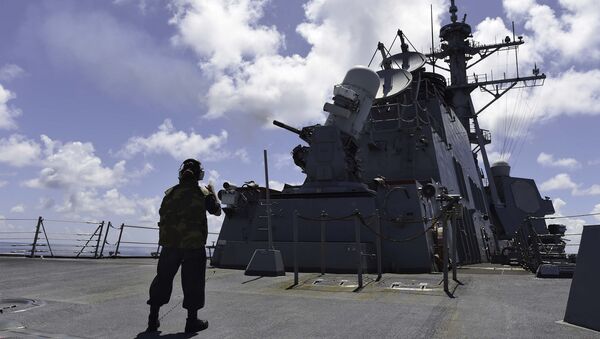 © Flickr / Naval Surface Warriors
Subscribe
China has conducted military drills in the South China Sea, which is at the center of dispute between Beijing and its neighbors. As the situation in the region is escalating, China’s neighbors who depend on China economically do not want to push it so far.

Andrew Leung, Asia Region Strategist, spoke to Radio Sputnik regarding the regional dispute and how the arms sales to Taiwan won't change the balance of power, as the dispute is about the power struggle between the United States and China.

“The sale this time is much less than it was the previous two times. In 2010 the sale was $6.39 billion much larger than the current $1.8 billion. In 2011 the sale was for $ 5.85 billion, again much larger than the current deal. Behind all this is the great power rivalry, we are seeing this in the South China Sea. The United States has its pivot to Asia,” Leung told Sputnik.

Taiwan Military Specialist Reassures China US Arms are Purely Defensive
The analyst went on to say that the Asian Pacific is a channel of trade and transportation for essential energy and resources and underpins the stability of the communist party for the whole China nation. The Taiwanese situation complicates the matter even further.

“The Taiwan people don’t want to antagonize China too much. Half a million Taiwanese industrialists and workers live and work in China and come back to their country to vote, these people don’t want to push the relations too far although there is no mileage for unification.”

According to Leung the sale of arms doesn’t change the poor image as both the US and China are aware of this rivalry. “I don’t think that the sale is really the trigger. I think the military drill is America’s response to China’s building artificial features in the South China Sea. The deployment of US frigate the USS Lasson has put China on the spot.”

“China’s action in the South China Sea is really a response to a threat. China has to strengthen its defenses. Another response that China is adopting is through the One Belt, One Road which really tries to link up Eurasia and Europe to China through infrastructure and pipelines so that some of the resources could be transported to China from Europe overland. Again this is part of the overall rivalry between the US and the rising super power China.”

He further talked about how certain countries like Australia, which is allies with the US, is coordinating on the military containment of China but on the other hand these military allies are also heavily dependent on Chinese goods.

“The entire Australian economy almost entirely is dependent on the demand from China in terms of commodities, so they would be unlikely to want a military confrontation with China. Almost all of China’s neighbors depend on China’s economy to various extents. These countries have China as the largest trading partner and main source of economic growth,” Leung said.

“China is not being so uptight about it because China is already embedded in the whole world’s production chain. You look at any kind of product from clothing you wear to mobile phones you use; China is embedded in it already. This reality cannot be changed no matter how many aircraft carriers or frigates are deployed to China,” the analyst concluded.

000000
Popular comments
What China does is China's business and all US interference is so the US can control China and every other nation of Earth. But as China grows in strength the US will have to recognise that it is one of MANY countries and is not better than any of them. It is equal to them.