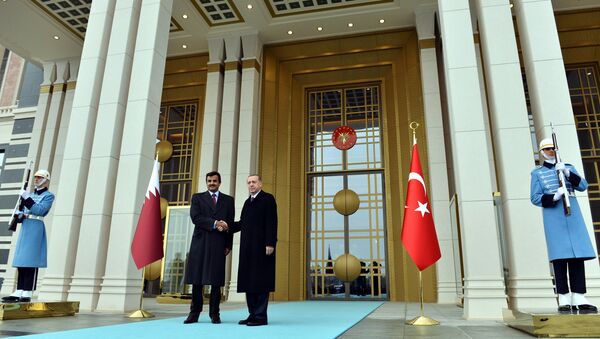 © AP Photo
Subscribe
Turkish officials have announced the creation of a new 3,000-troop base in Qatar, serving as the country's first large-scale military mission overseas. Ankara, for its part, may reciprocate, paving the way for Qatari troops in Turkey. But what, apart from the apparent "rediscovery of historic and brotherly ties," is behind the decision?

On Wednesday, Turkish Ambassador to Qatar Ahmet Demirok announced that Ankara would be establishing a base in the Gulf state, with the express purpose of confronting "common enemies" in the region.

"Turkey and Qatar face common problems about developments in the region and uncertain policies of other countries…We confront common enemies. At this critical time for the Middle East cooperation between us is vital," the ambassador said, cited by Reuters.

Turkey Has Plans to Station 1000s of Troops at New Military Base in Qatar
The base, Reuters clarified, will house ground troops, air force and naval personnel, as well as instructors and special forces. It will be established in accordance with a 2014 agreement between Ankara and Doha, ratified by Turkey's parliament in June. Under the agreement, Qatar could also build its own base in Turkey in the future. About 100 Turkish military personnel are already in Qatar, alongside the 10,000 US troops stationed at the Al Udeid Air Base, the largest US base in the Middle East.

Both countries, it's worth noting, are known to be pushing for the overthrow of Syrian President Bashar Assad. Both are also keen supporters of the Muslim Brotherhood, and, moreover, both have been accused of directly or indirectly supporting the Daesh (ISIL/ISIL) terrorists in Syria and Iraq. Qatar has allegedly provided the terrorist group with financial support, while Turkey has been implicated in the trafficking of smuggled Daesh 'blood oil'.

Commenting on the news, as well as on Saudi Arabia's announcement, made earlier this week, that it would be creating a 34-member 'Muslim anti-terror coalition', Svobodyana Pressa journalist Anton Mardasov suggested that together, the moves "could be a signal that the main sponsors of international terrorism seriously intend to start a ground operation in Syria and Iraq."

US Reportedly Constructing Airbase in Northeastern Syria for Airstrikes
Speaking to the newspaper, Vladimir Karyakin, a senior researcher at the Defense Studies Department at the Russian Institute for Strategic Studies, suggested that for now, the Turkish-Qatari move is merely a political maneuver.

"The objectives," in Karyakin's view, "are as follows. First, to show Russia that Ankara are not a bunch of simpletons. That is, 'if you in Russia have set up your own military base in Syria (which Moscow has repeatedly emphasized is temporary), we too have our own armies, and we can come to agreements with our own allies.'"

"Secondly," the analyst noted, "Turkey's base in the Persian Gulf is, naturally, a counterbalance to Iran. Third, this display of military cooperation between Qatar and Turkey can be seen as a sort of demonstration that Doha has not abandoned its plans to build a pipeline through Syria and Turkey to Europe, despite the fact that Assad has been interfering with such plans."

For his part, Sergei Balmasov, an expert at the Russian International Affairs Council, took note of the Turkish ambassador's emphasis on "common enemies."

"We know perfectly well," Balmasov told Svobodnaya Pressa, "that Russia's relations with Turkey and Qatar are quite difficult – I would say unfriendly. Doha is a serious competitor for us in terms of natural gas, and Qatar is also one of the main sponsors of jihadist terrorism in Syria and beyond. It's also worth remembering that it was on Qatari territory that prominent representatives of Chechen separatists often hid. However, it's clear that the strengthening of military cooperation between Qatar and Turkey is not a message aimed only at Russia."

Why Russia Cannot Trust Saudi Arabia's So-Called Anti-Terror Coalition
"The appearance of the Turkish military base in Qatar, next door to the American Al Udeid airbase, calls into question the depth of American influence in Doha. Both Turkey and Qatar have areas of friction with the United States. We know that the Americans actively work to influence the domestic situation in Qatar, attempting for example, to soften Doha's policy toward migrants."

Moreover, the expert observed, "recently, we have seen observed an anti-Iranian tilt from the Qataris. If the former emir even supported Tehran on some questions, today, we hear statements of concerns about Iranian expansionism. It's no coincidence that Qatari military forces are involved in the operation in Yemen against the pro-Iranian Houthi forces there, and that the Qataris are now howling about the pro-Iranian forces in Syria."

"In turn," Balmasov noted, "the possible creation of a Qatari base in Turkey would be an important precondition for strengthening the insurgents' activities in Syria. Moreover, it would serve as a guarantee that Qatar will not leave Turkey in the lurch in dealing with emerging challenges, and that it is ready to seriously invest in the country, compensating it for the costs of Ankara's conflict with Moscow."

In the analyst's opinion, the announcement on the base, coinciding with reports on the creation of the Saudi coalition, "is, on the one hand, a sign of the convergence of the key players on the Syrian crisis." However, "on the other, given the serious friction between Qatar and Saudi Arabia in the fight for influence in the Arabian Peninsula and the Arab world in general, active cooperation with Turkey, which has one of the most powerful armies in the region, gives the Qatari emir a serious trump card in furthering its policies. Backed by the Turks, he can afford to listen to the Americans less."

Ultimately, Balmasov suggests, "the announcement on the base is a signal: to Russia, to the US, to Iran and, in part, to Saudi Arabia as well."

Saudi-Led Sectarian Alliance to Target Minorities as Terrorists - NGO
Alexei Fenenko, an associate professor at the Faculty of World Politics at Moscow State University, disagrees, suggesting that the Turkish move could be part of a strategy laid out in Washington.

"In October, the Americans began actively insisting that Russia had allied itself with the Shiites, in particular, as a partner of the Shiite coalition in Syria (involving the Syrian Alawites, the Iranians, and Hezbollah). Now, we see that through their Saudi and Qatari allies, the Americans are attempting to create some semblance of a Sunni coalition to counterbalance Russian and Iranian influence in the Middle East – in other words, a counter-bloc."

"It's clear," Fenenko suggests, "that the first test of the so-called Sunni bloc's strength was the war in Yemen…Now, this coalition is beginning to take on a more tangible form. I do not believe that the [Saudi-led] coalition will agree to a deployment of troops to Iraq and Syria any time in the near future. Rather, its formation, like the creation of the Turkish base in Qatar, is a card for a game which hasn't started yet. Along with it will be the following steps: attempting to create a cohesive anti-Assad government, the further reduction of oil prices, and the supply of arms to the insurgents (which will allow the Americans to say 'it was the Saudis and Qataris, not us. Take it up with them')."