Ankara's Foolishness Has Left It Scrambling for Alternatives to Russian Gas 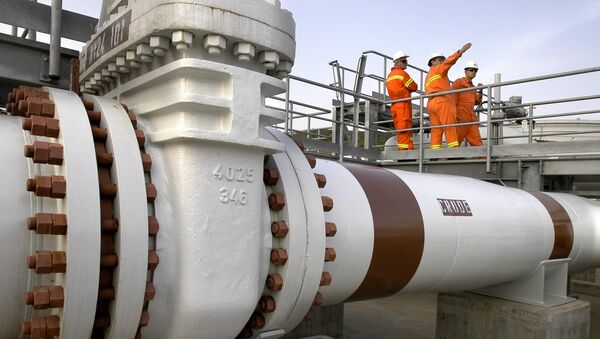 © AP Photo / Tefken
Subscribe
The conflict between Moscow and Ankara, which came to a head late last month after a Turkish F-16 downed a Russian Su-24 over Syria, has left a Turkey thirsty for natural gas scrambling to find alternatives to Russian supply. But with most of the alternatives to Russian gas looking shaky, has Ankara painted itself into a corner?

With Turkey's growing economy thirsty for new energy supplies, and Russia currently accounting for over 55% of the country's existing natural gas consumption (about 48 billion cubic meters in 2014), the suspension of talks on the Turkish Stream gas pipeline has been one of the most serious consequences of the expanding Russian-Turkish geopolitical and economic conflict.

For Russia, the project, proposed last December, was conceptualized as an alternative to the South Stream, a project which was abandoned after Brussels successfully put the screws to Bulgaria to effectively withdraw from the project. For Turkey, it marked an opportunity to satisfy its own needs, while sending the rest of the supply to the European Union (the pipeline's capacity was to have been a maximum 63 billion cubic meters per annum).

Most Turks Afraid of Being Left Without Russian Gas - German Media
The US Energy Information Administration has warned that rapid growth in demand has stretched Turkey's existing import infrastructure close to the limits of its capacity. With the Turkish Stream project frozen and the future of its energy partnership with Russia under threat, Ankara has been left scrambling to find alternatives.

Speculation, the analyst noted, is running rife, from talk of an Israeli-Turkish project to pump gas from the Leviathan gas field off the coast of Israel, under the Mediterranean Sea, to southern Turkey, to suggestions that Saudi Arabia and Qatar might try to supply Turkey via pipelines or tanker-based LNG deliveries.

With Ankara dismissing the first option out of hand, the Saudi/Qatari possibility also seems to be off the table, according to Pakhomov, since "with the war in Syria and Shia-dominated government in Iraq, building a pipeline is not feasible." As for LNG deliveries, the analyst notes that they "are always complicated and extremely costly."

"The next option," Pakhomov suggests, "is Iran. Bilateral ties here are complicated, to say the least. But Iran is Turkey's neighbor, and enjoys the second-largest natural gas reserves in the world. In addition, the process of lifting international sanctions has been launched. Whatever grudges exist between Tehran and Ankara, the European Union and its major members are eager to improve relations with Iran. In that context, Turkey might be mobilized by [the] Europeans to become a bridge between Iranian gas riches and European customers."

Turkish PM Davutoglu Hopes to Keep Gas, Akkuyu NPP Contracts With Russia
Still, given Turkish attempts to topple Tehran's allies in Syria, and an increasingly activist policy which threatens Iranian interests in Iraq (including, as of earlier this month, direct military intervention), it remains to be seen whether Iran can be lured or coerced into making a deal with Ankara –at least with Erdogan's Ankara. Judging by Tehran's experience and mentality, including their willingness to suffer the economic consequences of defying much of the Western world, including the US, since as far back as 1979, it seems unlikely that the country would be willing to nonchalantly trade in its regional allies for a few pieces of silver from the Turks.

Moreover, Pakhomov suggests that there are numerous practical issues to overcome. For one, the necessary pipeline or LNG infrastructure necessary to bring Iranian gas to Turkey, not to mention Europe, does not exist. Moreover, questions have arisen as to "whether the Iranian gas industry will be ready to implement this immense task," given the technological and efficiency lag caused by years of sanctions.

In any case, the analyst notes, "when evaluating the prospects for Iranian oil and gas, one should not forget that the Iranian energy sector is shaped by the nature of the Iranian state." In other words, Tehran's energy policy is determined to a very large degree by its politics, not the other way around.

With Saudi Arabia, Qatar and Iran off the table, at least in the short term, "the only country left," according to Pakhomov, "is Azerbaijan. Azerbaijan and Turkey are neighbors with good political relations, and are building together the Trans-Anatolian Natural Gas Pipeline (TANAP), which is intended to bring Azeri natural gas to Europe." Set to open in 2018, the pipeline's initial capacity of 16 billion cubic meters per year is then expected to rise to 31 billion cubic meters by 2023.

"It is no coincidence," the Pakhomov suggests, "that when the crisis in relations between Moscow and Ankara started, Azerbaijan and Turkey announced that the construction of TANAP would be sped up." However, he added, "it would be too optimistic to consider the pipeline a done deal to eventually deliver a heavy blow to Russia's presence on the European gas markets."

"Questions abound," according to the analyst, over whether Azerbaijan will be able to hold to its export promises. "We know that the giant Shah Deniz field is planned to be the main source of gas for TANAP, and that earlier this year the other pipeline that carries Azeri gas – the Trans Adriatic Pipeline – received an extension of its exemption from the EU's third energy package. The latter took place due to the postponement of gas deliveries to Europe from Shah Deniz Phase 2, which is also intended to supply TANAP."

Why TANAP Pipeline is Not an Alternative to Turkish Stream
"We also know that during the last decade, with the change of its geopolitical priorities, Georgia switched from Russian to Azeri natural gas. But today there is information about possible talks between Tbilisi and Gazprom over an increase in the Russian supply, which is currently 8 percent of Georgia's import market. Furthermore, the Georgian energy minister emphasized that his country will have to buy gas from Gazprom if Azerbaijan does not increase supplies from Shah Deniz."

Falling oil prices, according to Pakhomov, are another factor limiting Azeri initiatives. "After all, the Azeri national oil company SOCAR finances this development from oil revenues. How negative will the consequences be of the recent fire on the SOCAR oil rig, which accounts for 60 percent of the company's production?"

"All these factors," Pakhomov says, "need an answer before considering a possible increase in the export of Azeri natural gas to Turkey and Europe. Politics is also a factor: despite more than twenty years of discussion about Azerbaijan's great potential as a Russian gas competitor in Europe, relations between Moscow and Baku are still rather friendly, [and] Azeri officials are very cautious in commenting on the possibility of increased rivalry with Russia, even after the start of the Ukrainian crisis."

Furthermore, the frozen conflict between Azerbaijan and Armenia in the Kharabakh region, according to the analyst, "gives Moscow additional leverage to hold Baku in check." Thus, ultimately, "considering SOCAR's potential difficulties, we should ask if the time has come for the Azeri state company to accept Gazprom's offer to buy Russian gas."

"In any case," Pakhomov concludes, "any of Turkey's options to satisfy its demands for gas without addition exports from Russia would be costly and complicated. Soon we will see Ankara's choice, and whether it will affect the market position of Russian gas in Europe."