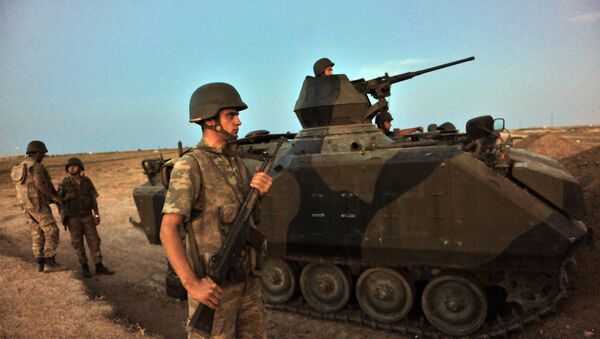 Just a few weeks after shooting down the Russian Su-24 bomber in the skies of Syria, Ankara sent a battalion of twenty-five M-60 Patton tanks to the Mosul District of Iraq's Ninawa Governorate.

The move could be regarded either as an attempt to compensate for the destruction of Daesh's (IS/ISIL) oil smuggling infrastructure, or as Turkey's preparations for the aftermath of the future defeat of Daesh in Iraq, according to Mahdi Darius Nazemroaya, a sociologist, award-winning author and geopolitical analyst.

"The Turkish press even announced that Ankara had declared that it was establishing a permanent military base inside Iraq's Mosul District. The Iraqi federal government reacted immediately by calling the Turkish move a hostile act that violated international law and Iraqi sovereignty," Nazemroaya writes in his analytical report for Strategic Culture Foundation.

Turkey's Push to Create New Ottoman Empire 'Blowing Up in its Own Face'
While the Turkish government was trying to justify its de facto invasion of Iraq, it turns out that Turkey's foreign minister at the time Feridun Sinirlioglu had inked an illegal agreement with Kurdistan Regional Government President Massoud Barzani to establish the Turkish military base in Mosul on November 4, 2015.

Nazemroaya calls attention to the fact that the area of Kurdistan region of Iraq has no right to make any defensive agreements with other governments on its own. Furthermore, the Kurdistan Regional Government has no legal jurisdiction over the area the Turkish military occupied.

"In parallel to the ISIL [Daesh] offensive against Iraq from Syria, the Kurdistan Regional Government opportunistically used the ISIL attacks to send its Peshmerga troops into the energy-rich Kirkuk Governorate, to gain control over part of the Mosul District, and unilaterally take control of the territory that the Iraqi federal government administrated," the geopolitical analyst explains.

Regardless of Baghdad's vocal protests, Ankara claimed that it was "out of the question" and "impossible" to remove the Turkish troops from the Iraqi territories and referred to the necessity to support Turkish military trainers and advisors who had been reportedly deployed 15 to 20 kilometers from Daesh positions.

Turkish President Erdogan went even so far as to point the finger at Russia and Iran, accusing the countries of "engineering the crisis between Turkey and Iraq."

However, Iraqi Ambassador to the United Nations Mohammed Ali Al-Hakim sent a letter to the UN Security Council on December 11, asking it to force Turkey to withdraw its military from Iraq.

Nazemroaya believes that Turkey's military deployment in Iraq is a direct reaction to successful advance of Russia, Syria, Iran and Iraq against Daesh.

At the same time, according to the analyst, the Turkish move could have been intended to help the Kurdistan Regional Government to consolidate the territory and energy reserves it illegally annexed from Iraq in 2014.

"Turkish support for Iraqi Kurdistan's separate oil export capacity has also weakened the unity of Iraq and the finances of both Baghdad and the Kurdistan Regional Government," he notes.

Respecting Sovereignty? Iraq Wants UN to Intervene in Turkish Troop Saga
The Turkish military maneuvers on Iraq territory are the result of coordination between Ankara and the Kurdistan Government, the geopolitical analyst points out, referring to the fact that on December 9 Massoud Barzani went to Turkey in order to meet with President Erdogan and Turkish Prime Minister Davutoglu.

"Subliminal messages were being sent: very tellingly the Iraqi flag was absent and only the flag of Iraqi Kurdistan was put alongside the Turkish flag during the meetings," Nazemroaya stresses.

Interestingly, against the background of these events, President Erdogan announced an upcoming trilateral meeting between the Turkish government, the Kurdistan Regional Government and Washington on December 21.