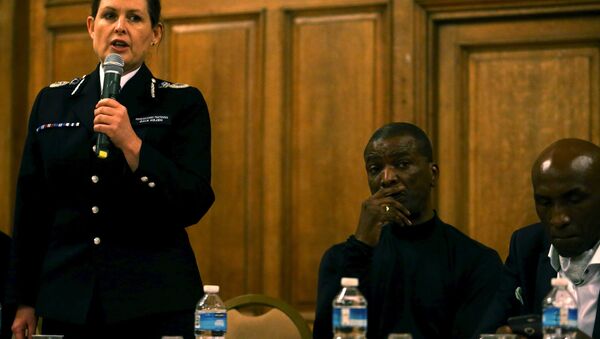 © REUTERS / Neil Hall
Subscribe
A police firearms officer has been arrested and suspended from London's Metropolitan Police Service after a man was shot dead during a police sting to stop two convicts escaping from a prison van outside a court in north London.

London Police Trying to Diffuse Tensions After Rare 'Gangster' Shooting
Jermaine Baker, 28 from Tottenham was fatally wounded while he sat in his car outside Wood Green Crown Court. Rumors had begun to circulate that he was asleep at the time.

In a move to diffuse any tensions with the police, following the fatal shooting, the IPCC and senior police officers held a meeting at Tottenham Town Hall packed out with people keen to hear what the police had to say.

The Independent Police Complaints Commission (IPCC) commissioner Cindy Butts used the forum to announce that that officer involved had been arrested and had been interviewed under caution. Butts said the evidence suggested that Mr Baker was in a black Audi when he was shot.

"In that car was what appeared to be a non-police issue firearm," the IPCC commissioner said.

The public meeting was also attended by Tottenham MP David Lammy who told the Today program: "There was a lot of pain and anger where the rumor on the street was [that] this man was asleep in a car.

"I am deeply, deeply concerned. We must be careful we do not smear someone's character and there is a sense in the community that this comes from the Metropolitan Police."

"It is only right and proper that any officer who has made the decision to use lethal force fully accounts for their actions."

Chief Superintendent Victor Olisa said Jermaine Baker was not on the borough's list of gang members and wanted to make it clear that he should not be described as a "gangster."

The concern for the community stems from the fatal shooting of Mark Duggan by police in 2011, when riots broke out in Tottenham and spread across cities in the UK.

David Lammy MP said he thinks the next few days will be difficult for all those involved. Tottenham is tainted with the legacy of the death of a black man at the hands of the police; and the subsequent start of violent riots across Britain.

000000
Popular comments
It was cold blooded murder, by Police bastards.