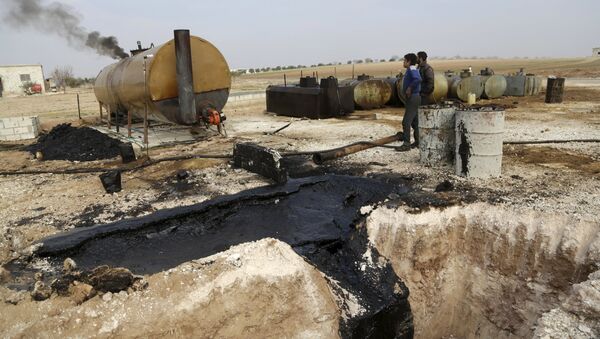 ISIL Oil Sales Drop 'Significantly' Due To Russian Airstrikes in Syria
Retired Lt. Gen. Thomas McInerney suggested that the jihadist group might be tempted to take more fields, but Russian airstrikes prevent them from doing so.

“They’ll be tempted to but I do not see Daesh (ISIL/ISIS) expanding with the Russians there. The Russians are using their air power far more effectively than the US,” former Assistant Vice Chief of Staff of the US Air Force, Lt. Gen. Thomas McInerney told Fox News in a live broadcast.

“Some may say it is not in accordance with the law of land warfare but the fact is they [the Russians] are getting results,” he added.

Earlier on Monday Russia’s envoy to UN warned that Moscow could raise the issue of imposing sanctions on Ankara over Daesh oil smuggling.

“Mechanisms exist to place sanctions on both Turkish companies and individuals. Even the country could be subject to sanctions if it is shown that it has not taken effective measures against financing terrorism,” Churkin told RIA Novosti.