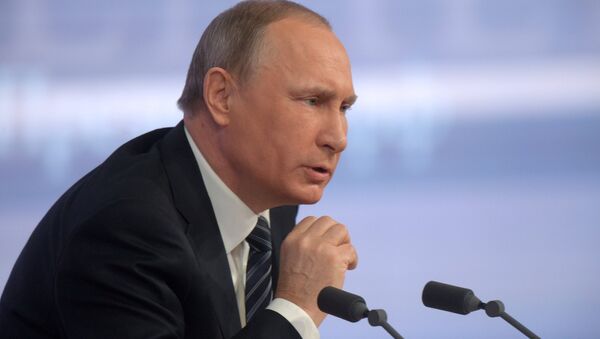 Russian President Vladimir Putin said that no country may, or has the right to spread its jurisdiction on other countries, especially on international organizations.

MOSCOW (Sputnik) — Western intrigues were obvious in the FIFA corruption scandal, no country may use its jurisdiction on international organizations, Russian President Vladimir Putin said Thursday.

"[Western] intrigues exist of course… No country may, or has the right to spread its jurisdiction on other countries, especially on international organizations," Putin said during his annual press conference.

Corruption in the International Federation of Association Football must be established through an investigation, but no such results have been published as yet, according to Putin.

US Identifies 16 New Individuals in FIFA Probe, Looks to Extradite 2
In May, the US Justice Department charged nine FIFA officials and five corporate executives with allegedly receiving some $150 billion in bribes. The same month, Switzerland opened an investigation into the FIFA bidding process for the World Cup championships in 2018 and 2022.

"As for Joseph Blatter [FIFA President], he is a very respected man. He has done a lot for the development of international football. You know, his contribution, in the humanitarian sphere, to the world is enormous. He always used or tried used football not just as a sport, but as an element of cooperation between countries and peoples. This is who should be given the Nobel Peace Prize," Putin added.

In late September, the Swiss Office of the Attorney General launched a probe into corruption accusations against Blatter. His is suspected of making a "disloyal payment" of $2.05 million to UEFA head Michel Platini in 2011 at the expense of FIFA, for work allegedly performed during the period 1999-2002.