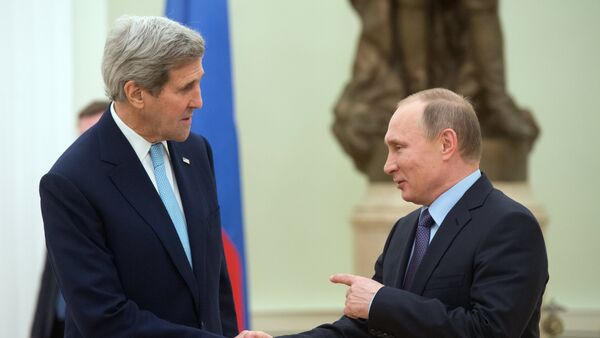 Resolving the Syrian crisis and fighting terrorism predictably became the main themes of US Secretary of State John Kerry's visit to Moscow, according to RIA Novosti.

Not Just Business: How is Kerry Spending Time in Moscow?
As was expected, the main topics of US Secretary of State John Kerry's visit to Moscow were the settlement of the Syrian civil war and ways to improve the coordination of counter-terror efforts, RIA Novosti reported, referring to Kerry's talks with Russian President Vladimir Putin and Russian Foreign Minister Sergey Lavrov.

Opening the talks, Putin stressed that Moscow and Washington are seeking to solve the most difficult challenges facing the world, while Kerry, in turn, said that talks on the settlement of the Syrian civil war revealed a number of new opportunities and that Russia along with the United States could make a great progress.

Lavrov and Kerry meet for talks in Moscow https://t.co/naaQCgx33V pic.twitter.com/7sQ6J8B4jJ

Speaking to reporters after the talks, Kerry and Lavrov touted the negotiations as concrete and substantive, saying that Russia and the US should continue to jointly seek a solution to the Syrian crisis at Friday's ministerial-level meeting of the International Syria Support Group in New York.

Kerry, for his part, specifically underscored the necessity of developing effective collaboration between Russia and the United States.  Washington is ready to work with Russia in the fight against Daesh (ISIL/ISIS).

"No doubt, both sides and the international community benefit from the United States and Russia effectively working together," Kerry said, signaling Washington's readiness to cooperate with Moscow on the fight against Daesh.

"Our meeting mainly focuses on Syria, the fight against terrorism and Ukraine. During talks with President Putin, I reaffirmed that that the United States is ready to work with Russia to combat Daesh," Kerry said.

Separately, Kerry said that both sides managed to reach a consensus on a spate of difficult issues related to Syria. In particular, the sides agreed on the exchange of data between Russia and the United States concerning the areas of military operations against terrorists in Syria.

"We also talked about which areas we, Russia, conduct operations in, and we talked about how to ensure that our military knew where someone works," Kerry said during a press conference with Russian Foreign Minister Sergey Lavrov at the Kremlin on Wednesday night.

Lavrov, in turn, reiterated that Moscow and Washington had agreed on steps to better coordinate the anti-terror fight, which he said should become more efficient.

"We confirmed the agreements that had been reached between the military of Russia and the United States, as well as accords that are applied to the US-led coalition which fights Daesh," Lavrov said.

On Syria, Kerry made a surprise announcement that even though Bashar Assad should not be president of Syria in the future, the United States and its partners are currently not seeking a regime change in Syria. Kerry also called for the intensification of the political settlement in Syria.

Kerry: When US & Russia work together to find common ground, our countries are better off & so is global community. pic.twitter.com/a48kDtK0I0

At the December 18 meeting of the International Syria Support Group, Lavrov said Moscow and Washington agreed that the group members should approve a draft resolution on Syria, which would then be submitted to the UN Security Council.

Also on the agenda of Kerry's talks were several Ukraine-related issues. In particular, the US Secretary of State said that the sooner the Minsk Agreements are met, the faster the sanctions against Russia will be canceled. He pointed out that the responsibility for the implementation of the agreements lies on all sides of the conflict.

"We believe that each side should fulfill its obligations under the Minsk Agreements. We know that there is still much work to do," Kerry said.
For his part, Lavrov said that Russia and the United States will use all the opportunities at hand to resolve the Ukraine crisis.

Isolation, Huh? Washington Has to 'Reckon With Putin's Facts'
Speaking to reporters after the Moscow talks, Kerry also said that Washington isn't pursuing a policy of isolating Russia.

"We don't have a policy aimed at isolating Russia. No," Kerry pointed out.

"But we have always said that when the United States and Russia reach a consensus, it is in the interests of the entire world. I think that it is a demonstration of the maturity of both leaders and the importance of their role," he concluded.