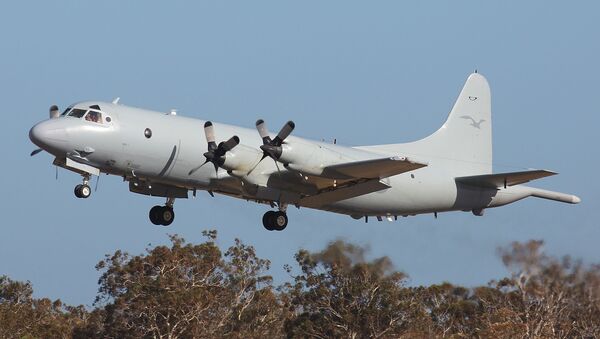 © AFP 2021 / Matt Jelonek
Subscribe
A BBC reporter flying close to China's artificial islands in the South China Sea overheard an Australian aircraft telling the Chinese navy it is carrying out a freedom of navigation flight in the area.

China Intensifies Military Drills in South China Sea
Australia is secretly carrying out freedom of navigation flights in the South China Sea, according to a BBC reporter who overheard a radio message from an Australian Air Force aircraft, informing the Chinese navy of its flight.

On Monday, Rupert Wingfield-Hayes reported about his trip over the South China Sea, which began from the island of Palawan, one of the disputed Spratly Islands which is controlled by the Philippines.

Two Philippines civil pilots flew Wingfield-Hayes towards Gaven Reef (Chinese: Nanxun) Fiery Cross (Yongshu) and Mischief Reef (Meiji), three of the reefs in the Spratlys which are controlled by China.

The crew flew within 12 nautical miles of the China-controlled islands in order to look at the construction work being undertaken, but were warned to leave the area by the Chinese navy.

According to the BBC reporter, the airplane's radio then overheard up the following message from Australian Air Force pilots, with no response from the Chinese.

"We are an Australian aircraft exercising international freedom of navigation rights, in international airspace in accordance with the International Civil Aviation Convention, and the United Nations Convention on the Law of the Sea — over."

Following the announcement, the Australian press reported that its Department of Defense had confirmed that the flight took place between November 25 and December 4.

"Under Operation Gateway, the Australian Defense Force conducts routine maritime surveillance patrols in the North Indian Ocean and South China Sea as a part of Australia's enduring contribution to the preservation of regional security and stability in South East Asia," the department stated.

The US has publicly carried out several freedom of navigation patrols in the South China Sea, most recently on October 27, when its USS Lassen destroyer sailed within 12 nautical miles of Subi Reef, one of China's man-made islands.

The Chinese government called the operation illegal, and stressed China's "indisputable sovereignty over the Nansha Islands and their adjacent waters." According to US press reports, US Navy warships are intending to carry out another freedom of navigation patrol in the coming weeks, this time close to Mischief Reef, known in Chinese as Meiji Reef.

000000
Popular comments
Time Russia send a GIANT FLEET .. Build a SUPER carrier, a heli carrier... and all double or triple defenses ships. The carrier should have regular ramp and EMALS on side landing strip. A super carrier with 150 jets and heli included assorted. A 55 tonnes KIEV class as heli multirole with STOL /VTOL planes. And frontal and rear gates. A KIEV class with modern wepons on front will be awesome.Including elec. cannons that may use kinetic weaponry and conventional if all else fails. And a GIANT sub for supplies.. or two... or more.. With defense weapons only and limited offensive to escape. Should be bigger that the TYPHOON.. Way longer. With a big docking station to exchange cargo. See how TU 160 stores missiles? Containers could be like that..
cast235
16 December 2015, 16:21 GMT
000000
The Australians have little foreign policy of their own having submitted to US control. So it's basically irrelevant that it was an Australian plane. Functionally it was a US plane. Not that the Australian media would ever reveal the truth to the people.