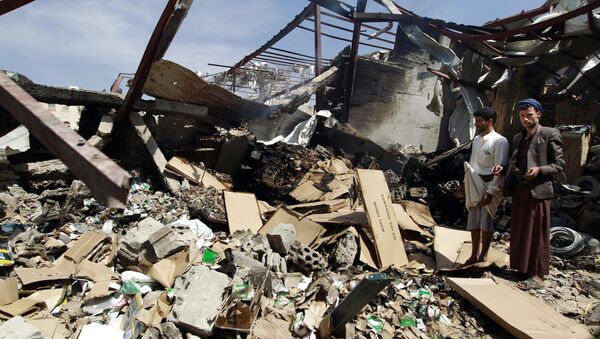 A seven-day ceasefire between a Saudi-led international coalition and the Yemeni Houthi rebels was enforced Tuesday ahead of the intra-Yemen talks in Geneva, the United Nations announced.

Arab Coalition to Suspend Hostilities in Yemen for 7 Days
CAIRO (Sputnik) – On Tuesday, the intra-Yemen week-long talks with participation of the envoys of the Yemeni government, the Houthi rebels and the General People’s Congress (GPC) are expected to kick off in Switzerland’s Geneva.

"The Special Envoy of the Secretary-General for Yemen, Ismail Ould Cheikh Ahmed, announces today the start of a cessation of hostilities in Yemen and considers it a critical first step towards building a lasting peace in the country," the United Nation said in a statement.

Ahmed called on all parties to respect this initiative and work towards putting an end to the conflict.

"The UN sponsored consultations that start today in Switzerland, seek to establish a permanent ceasefire and pave the way for a return to a peaceful and orderly political transition," the statement read.

Yemen has been engulfed in a military conflict between the government headed by Abd Rabbuh Mansur Hadi and Houthi rebels since early 2014.

Since late March, a Saudi-led coalition has been carrying out airstrikes against Houthi positions at Hadi's request.

The United Nations estimated some 5,800 mostly civilians died since Riyadh launched its anti-Houthi campaign. Four out of five Yemenis are believed to be in need of humanitarian aid.