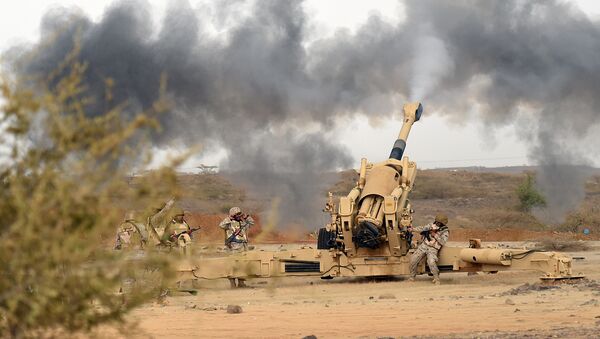 © AFP 2021 / FAYEZ NURELDINE
Subscribe
Organization for Democracy and Freedom in Syria director claims that the international community should be more critical of the new Saudi-led anti-terror coalition, which includes nations who incite sectarian and religious violence.

"It [the alliance] is completely ridiculous and a complete oxymoron because it is coming from a state where its Grand Mufti has called on Muslims, a couple of year ago, to burn down churches… and also welcomes [Muslim Brotherhood ideological leader Yusuf] Qaradawi’s call to carry arms and kill the infidel Shia and Alawites," Assad said on Tuesday.

Assad added that "the international community should condemn this and not just go ahead with it and say this great."

On Tuesday, Saudi Arabia announced the creation of a 34-nation Muslim coalition to counter extremism and terrorism. Included in the effort are largely Sunni nations, and countries with human rights records that include marginalizing and committing violence against minorities.

"We need to go after all groups who share the same perverted ideology, whatever their nomination is, whatever their brand is, all the countries who are supporting them, and all those who incite sectarian [and religious] hatred, violence and killing," Assad said.

Assad, who is based in London and is the cousin of Syrian President Bashar Assad, warned that a number of the new coalition members including Turkey, Qatar and Saudi Arabia have been supporting Islamic extremist groups "who all share the same perverted ideology of Salafi Wahabism" as does the Islamic State, also known as Daesh.

State Department: Saudi Coalition in Line With US Anti-Daesh Efforts
The failure by the west to condemn the sponsors of the ideology "is why we are going to have more terrorist attacks in the west," Assad pointed out, noting the influence of state-backed ideological leaders in shaping the thinking of some Muslims.

Saudi Arabia is a leading exporter of the Wahhabi ideology, which a number of nations, including the European Union, have identified as a key element in supporting Islamic terrorism.

000000
Popular comments
"Oxymoron" is the very word. This coalition is aimed against Russia and Iran and Syria - and at saving Daesh, as Putin has "degraded" it beyond what had been planned. It's all clearly set out in this transcript of a conversation between Israel Defense Minister Ya’alon and the neocon thinktank, The Brookings Institution, on December 4, 2015. www.brookings.edu/~/media/events/2015/12/04-saban-2015-israel-us-yesterday-today-tomorrow/transcript The conversation was really a call to help Israel out of its present dire straits – a call similar to the one made earlier, when Ya’alon met the House Foreign Affairs Committee, as recalled by Elliot Engel, who is a member of both ultra-Zionist bodies. The gist of the conversation is that Ya’alon finds that Obama has now yielded the Middle East to Putin (“Unfortunately, in the current situation, Russia is playing a more significant role than the United States” - p. 9) So, Putin has now strengthened both Iran and Syria Russia’s come down so strongly with Iran and Bashar al-Assad” – p. 7), to the great detriment of Israel, Ya’alon lamented. Now his consolation is coming...
rmukarutabana
16 December 2015, 06:22 GMT
000000
Newsfeed
0
New firstOld first
loader
LIVE
Заголовок открываемого материала
Access to the chat has been blocked for violating the rules . You will be able to participate again through:∞. If you do not agree with the blocking, please use the feedback form
The discussion is closed. You can participate in the discussion within 24 hours after the publication of the article.
To participate in the discussion
log in or register
loader
Chats
Заголовок открываемого материала
Worldwide
InternationalEnglishEnglishMundoEspañolSpanish
Europe
DeutschlandDeutschGermanFranceFrançaisFrenchΕλλάδαΕλληνικάGreekItaliaItalianoItalianČeská republikaČeštinaCzechPolskaPolskiPolishСрбиjаСрпскиSerbianLatvijaLatviešuLatvianLietuvaLietuviųLithuanianMoldovaMoldoveneascăMoldavianБеларусьБеларускiBelarusian
Transcaucasia
ԱրմենիաՀայերենArmenianАҧсныАҧсышәалаAbkhazХуссар ИрыстонИронауОssetianსაქართველოქართულიGeorgianAzərbaycanАzərbaycancaAzerbaijani
Middle East
Sputnik عربيArabicArabicTürkiyeTürkçeTurkishSputnik ایرانPersianPersianSputnik افغانستانDariDari
Central Asia
ҚазақстанҚазақ тіліKazakhКыргызстанКыргызчаKyrgyzOʻzbekistonЎзбекчаUzbekТоҷикистонТоҷикӣTajik
East & Southeast Asia
Việt NamTiếng ViệtVietnamese日本日本語Japanese俄罗斯卫星通讯社中文（简体）Chinese (simplified)俄罗斯卫星通讯社中文（繁体）Chinese (traditional)
South America
BrasilPortuguêsPortuguese
NewsfeedBreaking
03:14 GMTPele Cheers Up Fans by Posting Video of Him Riding Exercycle in Hospital
03:07 GMTAxis of Resistance Killed US, Israeli Commanders in Revenge for Soleimani's Assassination - Report
02:56 GMTPolitical Capital & GOP in His ’Grip’: Trump ’Wants Back’ in 2024, Journos Say
01:43 GMTIRGC Chief: Iran No Longer Sees US as Threat - Report
01:18 GMTChinese Covid Vaccines Reach 100 Nations, But WHO Warns Africa Still Short 470 Million Shots in 2021
01:04 GMTAwkward Moment as White House Staff Cuts Off Biden-Johnson Meeting in Mid-Sentence
00:20 GMTVideo: Military Jet Intercepts Small Aircraft Over NYC in the Middle of UN General Assembly
00:19 GMTPark Ranger ‘Implored’ Gabby Petito to Distance Herself From Toxic Relationship With Brian Laundrie
YesterdayVideos: 6.0 Earthquake Strikes Southeastern Australia
YesterdayPro-Reunification Candidate Chang Ya-chung Edges Ahead as Chairman Election in Taiwan’s KMT Nears
YesterdayTexas Governor Vows to Prevent Del Rio Migrant Surge Disaster From Being Replicated
YesterdayUber’s Business Model Faces Threat After Legal Setback Across Europe
YesterdayUS Lawsuit Challenges Alliance of 2 Airlines for Stifling Competition
YesterdayTaliban Say No Al-Qaeda Members Present in Afghanistan
YesterdayJoe Biden Faces Backlash Over Inept UN Speech
YesterdayUS Democrats Strike Down $1Bln in Israel Defense Aid to Keep US Govt Running, Reports Say
YesterdayPope Jokes ‘Some People Wanted Him Dead’ While He Was Undergoing Surgery, Reports Say
YesterdayNo American Dream for Haitians
YesterdayBoris Johnson Contradicts Joe Biden With Claim of Intelligence That Taliban Could Take Kabul
YesterdayPelosi Accuses GOP of ‘Trying to Force First-Ever US Default’ by Opposing Limit Suspension Bill