'Russians Stay Russians Even When They Speak English' 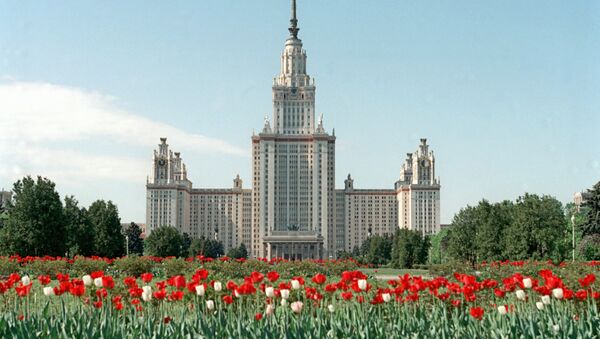 © Sputnik / Vladimir Viatkin
/
Go to the photo bank
Subscribe
Professor Zoya Proshina of the Department of Foreign Languages and Regional Studies at Moscow State University believes that Russians studying English in Russia shouldn't focus too much on getting familiar with the British or American culture behind the language.

-Speaking at the conference, you mentioned that the Russian version of the English language was quite legitimate. What exactly is this version?

Many Russians studying English claim that they speak British or American English. However, the British and American variants reflect the cultural and linguistic identity of the British and Americans, not Russians. Of course, we are trying to mimic native speakers, but differences remain. We speak with a different accent, we make our own choice of words, and, most importantly, our mindset is different, and this determines how we convey our thoughts. We read other books, we talk about our culture the way we choose, not in the way the British or Americans impose on us. Since every version of English is based on the cultural and linguistic specifics of a particular nation, the Russian variant is absolutely legitimate.

That's correct, but there are no language norms to support the Russian variant.

There's a theory of three concentric circles of the language conceived by American linguist of Indian origin Braj Kachru. The inner circle represents the traditional variants of English, which have long been used as the first language in a particular country. They have their own language variants. The outer circle includes postcolonial countries where some people speak English as their first language, while others use it as a bridge language. New language norms are formed there dynamically. Russia is part of the third and largest expanding circle where English has always been studied as a foreign language, drawing on the language norms of the first circle.

The philosophy of such language-learning methods suggests that we should base on British or American culture, and strive to get closer to the first circle. Ironically, our students often develop disdain for other English variants and mock other accents, such as Indian.

The Russian variant is based on Russian culture. We use English as a tool, as a secondary means for cultural expression, while we preserve our identity. If we continue to promote this concept, we will make ourselves clearer to members of the international community who want to know us better, and we will learn more about the world as well.

In what way does native Russian influence the process of studying English?

The word order in Russian is flexible, so, when speaking English, many Russians start their sentences with an object, which is not typical of English, such as in "the summer, I spent in a village." Since this is typical of the speech of many educated Russians, it has become a distinctive feature of the Russian variant of English.

Russian has enriched the international English vocabulary as well, introducing words designating Russian realities, such as perestroika, glasnost and sputnik, to name a few, which have been included in all English-language dictionaries, including the Oxford dictionary.

For years, I've worked at the Far Eastern University. The Department of Oriental Studies had a department of English as a foreign language. Instead of teaching students who majored in Japanese or Chinese studies how to talk about Japan or China in English, the students were forced to study the structure of the British parliament and the British judicial system. What's the point of doing so?

Negative effects arise when we get carried away by the English language and the culture behind it, and try to fit ourselves to foreign standards.

How can this message be communicated to English teachers at Russian schools and universities?

I think the process is already underway. The Education and Science Ministry has always insisted on including the Russian component in the process of learning a foreign language.

At first, we even overdid it. I recently read an article by American Professor Roland Sussex, who analyzed Soviet textbooks of the 1940s. Studying English back then clearly was ideology-driven. Students studied intraparty skirmishes between Trotsky and Zinoviev in English. The weather, a harmless topic at first glance, was presented with a slant such as: "It's damp, cloudy and dirty in London, and warm, sunny and clear in Moscow."

Of course, things are not portrayed in black-and-white anymore. Almost all textbooks are written by international teams of experts with the mandatory participation of Russian teachers. So, the textbooks include topics pertaining to Russian culture, cultural landmarks and famous Russians. Schoolchildren have been trained in terms of language and ideology to discuss these topics in English.

However, we should also make sure that studies are not skewed toward Britain, America or Russia. Today, people should be able to use English to speak about the entire world, including China, Europe and Africa. It's important to promote a global outlook on the world.

It all depends on the level of studies. Perhaps, it shouldn't be done at schools, but university students will definitely be asking to discuss current issues in a foreign language. So, we will speak about Islam, the China-Russia friendship, and migrants to Europe. There's no way around it.