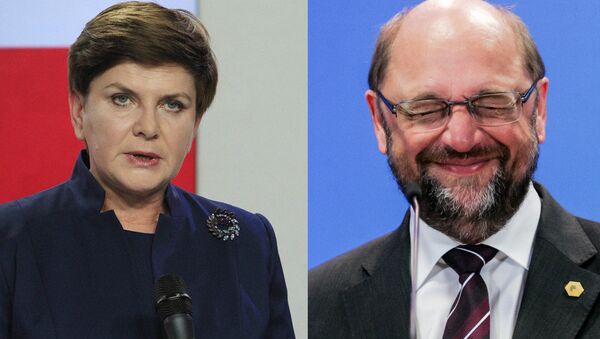 A row has broken out after the German President of the European Parliament described the new government in Warsaw of staging a "coup d'état" by making changes to its constitutional court, in an unusual diplomatic intervention.

The European Parliament president, Martin Schultz told Germany's Deutschlandfunk radio station: "What is happening in Poland has the character of a coup d'état and is dramatic. I assume that this week or in January at the latest we will have to discuss this extensively in the European parliament."

@MartinSchulz I demand apology for your disgraceful statement about traits of a coup in Poland. Think before you speak. It helps.

His remarks, which are diplomatically-speaking outré, brought immediate condemnations from the highest levels in Warsaw, with Prime Minister Beata Szydlo describing them as "unacceptable" and demanding an apology.

Her foreign minister, Witold Waszczykowski said Schultz's remarks were "unfounded and therefore irresponsible" and called on Poland's ambassador to the EU to meet with the European Parliament president.

"He should at least know that Poland has recently seen a free and democratic election whose results are undisputed, and that now in Poland, as in many other democratic countries, we are simply having a normal political debate about institutional solutions," said Waszczykowski.

Schultz's remarks were "scandalous" and "another example of German arrogance."

Schultz's comments "did not express a definitive judgment, but was an expression of concern on one of the founding principles of the rule of law in the EU, namely the division of powers with a democracy," Giacomo Fassina, his spokesman texted.

Poland's government — led by the Law and Justice party since October, when it won the election — has appointed five judges to the Constitutional Tribunal, which is supposed to make independent rulings, leading to protests accusing Szydlo's government of political interference in constitutional affairs.

Since coming to power, the Warsaw administration has eased out the head of the anti-corruption agency, announced plans to overhaul public media and limited opposition oversight of its surveillance services, which many believe are unconstitutional moves.

Schultz's intervention comes less than a month since he came under fire for criticizing Poland's anti-immigrant stance, saying the country lacked "solidarity" with other member states. He comments drew an immediate reaction from interior minister Blaszczak, who accused Schultz of "German arrogance".