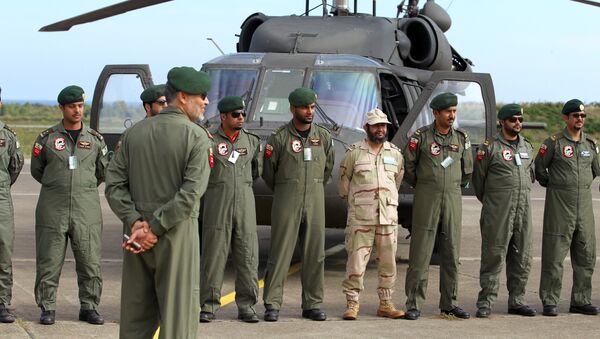 © AFP 2021 / PASCAL POCHARD-CASABIANCA
Subscribe
Saudi Arabia views Russia's military activities in Syria as a threat to its leading position in the region. Riyadh seeks to regain its key role by forming an anti-terrorism coalition, which may further divide the Muslim community and worsen the situation in the Middle East, an Iraqi MP told Sputnik.

Saudi Anti-Terror Coalition 'May Worsen Sunni-Shia Conflict'
On Tuesday, Saudi Arabia announced its plans to build up an anti-terror military coalition that will consist of 34 — mainly Islamic — countries, including Egypt. The joint operation command center will be based in the Saudi capital of Riyadh.

By creating the coalition, Riyadh is trying to regain the initiative in the region, where Russia is currently achieving significant success in the fight against Daesh terrorists, Majid al-Gharaoui, a member of the Iraqi Parliament's Security Committee, told Sputnik.

"Once they noted that the Russian Federation started to support Iraq and Syria and demonstrate a more serious approach to the fight against Daesh and other terrorist groups than the US-led coalition, they started to try to regain the initiative, to create a new road map for the region," the politician said.

According to al-Gharaoui, the new initiative may lead to a further division in the Muslim society and deepen the split between various courses of Islam.

Egypt Supports Saudi-Led Counter-Terror Coalition
The coalition, which includes Saudi Arabia, Egypt, Malaysia, Nigeria, Pakistan and Turkey, among other nations, was created "to counteract terrorism, which became a threat to the interests of the Islamic nation," according to an official statement of Riyadh authorities.

Earlier, Defense Minister of Saudi Arabia, Muhammad bin Salman Al Saud said that the purpose of the coalition will be the fight not only against Daesh, but also against other terrorist groups.

According to Al-Gharaoui, the statement of the Saudi Defense Minister is further complicating the situation, as the goals of the new alliance — with regard to what "terrorist groups" are to become target of the coalition's activities — largely remain uncertain. For instance, the Saudis mentioned the Shi'a militant and political group Hezbollah, which is not viewed as a terrorist organization by Iraq.

000000
Popular comments
How could this coalition of child molesting head choppers be any different from their mercenarie death squad franchise?

Mikhas
15 December 2015, 20:33 GMT4
000000
Russia made some intelligent series of moves in the middle east and now Saudi Arabia is trying to imitate. Although imitation is the greatest form of flattery, nothing beats the original.