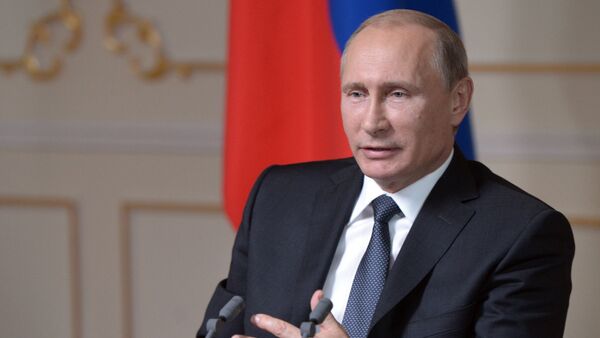 The president of Russia, Vladimir Putin, “took the world by surprise” by launching an air campaign in Syria, which helped to significantly boost Russia’s positions on international scene, military expert from Indian newspaper Daily News and Analysis wrote.

Any Force That Threatens Russia Should Be Destroyed - Putin
Putin's decision to act strong amid complex regional dynamics in the war against Daesh, also known as ISIL/Islamic State, was a strategically crucial move. Since Russia started to carry out air strikes against Daesh positions in the region, critically damaging the group's infrastructure, Russia has been promptly restoring its positions on the global stage, a retired Air Marshal of the Indian Air Force Anil Chopra wrote.

Putin left the world speechless with his military operation in Syria, Chopra wrote, and after the shoot down of Russia's Su-24 jet by Turkish air forces, the Russian president came forward with harsh rhetoric on Turkey's actions.

"Taking the world by surprise, Putin moved Russian fighters, surveillance aircrafts and helicopters in support of Assad in Syria, to take on Islamic State. He was quick to respond with very heavy bombing, when Islamic State claimed to have shot down a Russian charter Airbus 321 flight over Sinai, killing all 224 on board," the expert wrote.

"When Turkey shot down a Russian Su-24 fighter which had flown over its eastern region, Putin was quick to order sanctions and promised to punish them strongly. "

Chopra also noted the shift in Russia's foreign policy more towards the Asia-Pacific region, as Russia is tightening its links with China through SCO (The Shanghai cooperation Organization). Moscow built a trans-Siberian oil pipeline for markets in China, Japan and Korea. Beyond that, the president of Russia rearranged strategic partnership with India, and Russia is on good terms with all BRIC countries.

"Known to be honest and upright, he [Putin] reportedly does not make it to the 100 richest members of his own political party. Public opinion surveys put Putin's approval rating at 81%, the second highest of any world leader," the expert wrote. "For the last three years he has been the world's most powerful person, as listed by Forbes."

Taking into account Putin's success throughout recent years, Russia will likely keep on strengthening its strategic positions internationally, while the US will be busy with presidential elections, Chopra concluded.