Why Europe Should 'Beware of Cooperation With Erdogan' 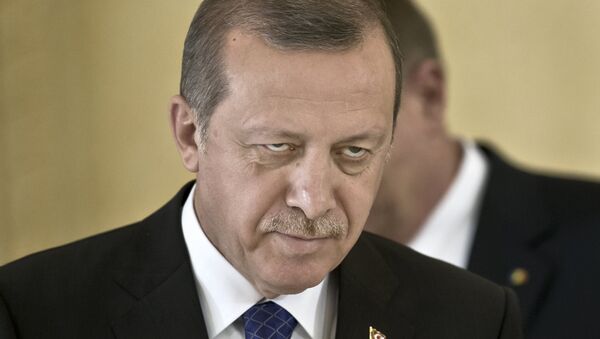 © AP Photo / Vadim Ghirda
Subscribe
If Europe wants cooperation with Turkish President Recep Erdogan it should realize that the cost of his help may be too high.

Europe in for a 'Nasty Surprise' as Germany, Turkey Do Secret Deal - Orban
The EU is set to implement a truly absurd scenario. According to the deal, Brussels offered Turkey a package of three billion euros and resumed admission talks. However the deal is likely only to encourage Erdogan’s cupidity, Adriel Kasonta wrote in his article for The National Interest.

Europe should beware of joint initiatives with Turkey as they may pose a threat to the principles and values the EU has built on, according to the article.

"It is quite astonishing how hypocritical we can be in the wake of terrorism and the urgent need to defend our way of living, in order to turn a blind eye to Turkey’s human rights failings, and bow to Ankara’s money demands," the author wrote.

Amid recent reports of Ankara supplying weapons to terrorists and Moscow’s evidence of the Erdogan family’s involvement in illegal oil trade, it is still unclear how Turkey could help solve the crisis it fuels. And after the downing of the Russian Su-24 bomber over Syria, the situation has become clearly absurd.

'Turkey Has Become a Danger for Everyone' - French ex-General
The EU wants effective cooperation with Erdogan. At the same time, Turkey committed an act of military aggression against Russia which has been carrying out intensified airstrikes against Daesh in response to a string of terrorist attacks in Paris, the article read.

German Chancellor Angela Merkel is the biggest contributor to this "dirty deal" as it has been described by many. She put pressure on the rest of the EU member states to finalize the agreement.

However, the very idea has been strongly criticized by Eastern European countries like Hungary, Slovakia, the Czech Republic and Poland.
For instance, Hungarian Prime Minister Viktor Orban said: "We don't want to sit down for talks with Turkey, making them think that they are our last chance of saving us."

Nevertheless, if President of the European Council Donald Tusk may be right, saying that Europe has no other options but to make a deal with a country whose principles and goals have always been different from those of Europe.

000000
Popular comments
"...different from those of Europe." This, from the mouth of a Polish official now turned President of the EU. You have to wonder if he wonders, every morning, "Who moved the furniture again?" because he is always getting out of the wrong side of the bed. Does he even remember what Europe stood for? Does he not miss those glory days?
marcanhalt
13 December 2015, 16:13 GMT
000000
"Snake eyes" Erdogan. Anyone have a mongoose?
marcanhalt
13 December 2015, 17:02 GMT
000000
Newsfeed
0
New firstOld first
loader
LIVE
Заголовок открываемого материала
Access to the chat has been blocked for violating the rules . You will be able to participate again through:∞. If you do not agree with the blocking, please use the feedback form
The discussion is closed. You can participate in the discussion within 24 hours after the publication of the article.
To participate in the discussion
log in or register
loader
Chats
Заголовок открываемого материала
Worldwide
InternationalEnglishEnglishMundoEspañolSpanish
Europe
DeutschlandDeutschGermanFranceFrançaisFrenchΕλλάδαΕλληνικάGreekItaliaItalianoItalianČeská republikaČeštinaCzechPolskaPolskiPolishСрбиjаСрпскиSerbianLatvijaLatviešuLatvianLietuvaLietuviųLithuanianMoldovaMoldoveneascăMoldavianБеларусьБеларускiBelarusian
Transcaucasia
ԱրմենիաՀայերենArmenianАҧсныАҧсышәалаAbkhazХуссар ИрыстонИронауОssetianსაქართველოქართულიGeorgianAzərbaycanАzərbaycancaAzerbaijani
Middle East
Sputnik عربيArabicArabicTürkiyeTürkçeTurkishSputnik ایرانPersianPersianSputnik افغانستانDariDari
Central Asia
ҚазақстанҚазақ тіліKazakhКыргызстанКыргызчаKyrgyzOʻzbekistonЎзбекчаUzbekТоҷикистонТоҷикӣTajik
East & Southeast Asia
Việt NamTiếng ViệtVietnamese日本日本語Japanese俄罗斯卫星通讯社中文（简体）Chinese (simplified)俄罗斯卫星通讯社中文（繁体）Chinese (traditional)
South America
BrasilPortuguêsPortuguese
NewsfeedBreaking
12:19 GMTEcoHealth Alliance, DARPA Toyed With Infecting Wild Chinese Bats With Covid, Leaked Docs Allege
12:17 GMTCristiano Ronaldo's Return to Manchester United Makes Him World's Highest-Paid Footballer
12:11 GMTUS House Passes Bill Compensating 'Victims' of Enigmatic 'Havana Syndrome'
12:07 GMTMacron, Biden to Hold Talks on Wednesday to Clarify Details of Australia's Decision on Submarines
11:57 GMTSudanese Authorities Lack Mandate to Sign Naval Base Agreement With Russia, Minister Says
11:44 GMTCanada Unlikely to See Another Snap Vote After Trudeau's Failed Bid to Win Majority
11:26 GMTBiblical Story of Sodom Likely Inspired by 'Cosmic Airburst' Bigger Than Tunguska Blast, Study Says
11:10 GMTUS 'Era of War Over'?
11:07 GMTPandemic Times: India's Healthcare Adopts Cloud Computing, 12 Mln Consultations Clocked
10:55 GMTAll Participants of Sudan Coup Detained, Will Stand Trial, Deputy Foreign Minister Says
10:51 GMTDonald Trump Sues NYT, Niece Mary Over ‘Insidious Plot’ Behind 2018 ‘Dubious Tax Schemes’ Story
10:48 GMTDriver of Zelensky's Aide Shefir Undergoing Leg Surgery, Report Says
10:34 GMTKremlin Regrets Erdogan's Claims About Crimea's 'Annexation' on Eve of Sochi Summit
10:18 GMTThe Truckers' Friend: UK Transport Secretary Takes Action to Protect M25 Motorway From Demonstrators
10:15 GMTStrong 6.5-Magnitude Earthquake Strikes Near Coast of Nicaragua
10:14 GMTHollywood Bids Farewell to Sex and the City Star, Dead at Age 57
09:58 GMTRussian An-26 Plane With 6 People Onboard Disappears From Radar in Khabarovsk Region
09:49 GMT'Hardest Decision of My Life': Uma Thurman Opens Up About Her 'Darkest Secret'
09:18 GMTZuckerberg Reportedly Approved Using News Feed to Push Pro-Facebook Coverage in Image-Reshaping Bid
08:59 GMTPakistan Wants to Help Train Afghan Security Forces, Ambassador Says