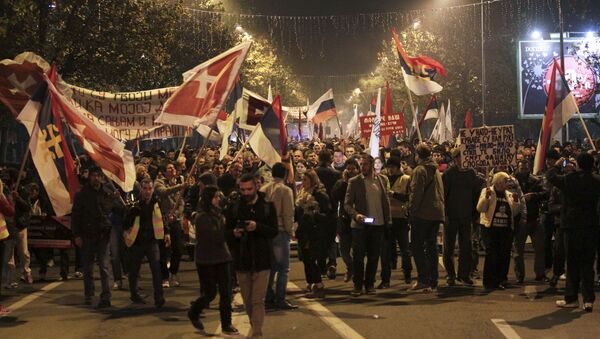 © REUTERS / Stevo Vasiljevic
Subscribe
Thousands of people took to the streets of the Montenegrin capital on Saturday to protest against the country's NATO accession talks.

"The political establishment, the political party, particularly, that is in power right now in Montenegro is firmly in favour of joining NATO," Balkan-based independent political analyst Navid Nasr said in an exclusive interview with Radio Sputnik.

Montenegro Opposition Gathers for Anti-NATO Protest March
Local media earlier reported that there are about 5,000 people taking part in the protests in the Montenegrin capital. According to the analyst, this is a huge number for a country with a total population of about 600,000, which signifies that large parts of the country's residents are opposing the political course of the elite.

However, the real change in the politics of the Montenegrin authorities can only be achieved if the protests turn into a serious, longstanding action of contention, the expert argued.

"It will happen only if the protests are strong enough to force some sort of referendum or change in the actual government," Nasr said, adding that such a scenario is possible if larger numbers of protesters come out to the streets or if they are able to bring military to their side.

According to the political expert, the latter option is quite realistic as many people, including the Montenegrin military, still remember the NATO bombings in the former Yugoslavia.

"That could happen actually. Again we are talking about the Montenegrin military, long-standing officers. They remember what happened in the late nineties. And they are probably themselves not too keen on linking up with NATO unless they are careerists or unless they think that possibly they can derive some sort of benefit from that," Nasr said.

Earlier, the head of the New Serb Democracy (NSD) party, Andrija Madic, said that Montenegro may be brought to the brink of civil if the NATO membership were decided by the parliament without a referendum.

Nasr argues that a referendum would be a good opportunity to change the government's policy, though it is not clear whether protesters will be able to reach this stage.

"They [authorities] are not really too interested in what protesters think. The protesters have to reach the stage where they cannot be ignored," Nasr stated.

According to the expert, Montenegro would be "a huge win for the NATO camp," as it would give NATO a perfect opportunity to strengthen its positions in the Central Balkans. The country's membership in NATO will enable the military alliance to keep the region — which tends to act independently when it comes to foreign relations with other regions — under control, Nasr said.

000000
Popular comments
The main goal once Yugoslavia has been divided is to bring all those mini countries into nato's influence to cut them from their soviet past. Here's a good article in spanish : www.voltairenet.org/article189590.html