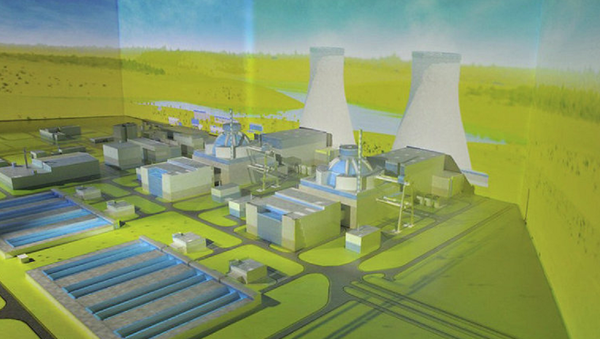 © Photo : AKKUYU NÜKLEER A.Ş.
Subscribe
Ankara has repeatedly stalled legal proceedings on the Russian-backed construction of Turkey's first nuclear power plant in the town of Akkuyu and may wind up owing billions for the uncompleted project, according to Turkish energy expert Aydin Sezer.

Russia, Turkey Halt Talks on Turkish Stream, Akkuyu Power Plant - Source
In an interview with Sputnik, a Turkish energy expert and former trade advisor to the country's embassy in Moscow, Aydin Sezer, said that Ankara has repeatedly dragged its feet in the implementation of legal proceedings pertaining to the construction of the Akkuyu nuclear power plant.

His remarks came amid reports that bilateral talks on the project halted after Moscow slapped Ankara with a batch of economic restrictions due to Turkey's downing of a Russian warplane in late November. Other sources claimed, however, that the negotiating process is underway.

Sezer, for his part, recalled that the talks on the construction of the Akkuyu NPP have already been stalled for a year because of the Turkish parliament's failure to deliver on its promise to prepare an array of legal regulations related to the project.

"But for the incident with the Russian warplane, the parliament would have now discussed the issue. However, the current situation is that the necessary legal documents have yet to be approved by parliament," Sezer said.

He added that despite all this, Russia has already provided an investment inflow in Turkey worth at least three billion dollars to implement the project.
Sezer also said that scrapping the construction of the Akkuyu NPP is not in Ankara's interests.

"If Ankara decides to suspend the project, it will be unable to pay a hefty compensation for the cancellation of construction. This is why Turkey is not in a position to decide on decommissioning the project," Sezer said.

Russian Government Not Suspending Turkish Stream, Akkuyu Nuclear Projects
Russian-Turkish relations have been strained by Ankara's downing of a Russian Su-24 frontline bomber over Syria on November 24, which claimed the life of a Russian pilot and a naval infantryman who was engaged in subsequent rescue operations.

President Vladimir Putin described the downing of the Russian warplane, which was conducting an air operation against Islamist terrorists, as a "stab in the back" and decreed a series of economic restrictions against Turkey.

000000
Popular comments
Bn of dollars from Turds pockets into Russian pockets is a good thing. However, the Russians must be careful because the Turds may say that by accepting $$ from the Turds, the Russians are doing business with ISIS even though indirectly via Turdish hands.
11 December 2015, 12:17 GMT
000000
Russia have nothing to do with the cash. Is a corporation that inked the deal. Depending on who owns it. But anything nuclear should be state controlled. Anyways, why talk? Wait the stipulated time and sue, under the contract clause. And that it. Why talk so much?
cast235
11 December 2015, 12:32 GMT
000000
Newsfeed
0
New firstOld first
loader
LIVE
Заголовок открываемого материала
Access to the chat has been blocked for violating the rules . You will be able to participate again through:∞. If you do not agree with the blocking, please use the feedback form
The discussion is closed. You can participate in the discussion within 24 hours after the publication of the article.
To participate in the discussion
log in or register
loader
Chats
Заголовок открываемого материала
Worldwide
InternationalEnglishEnglishMundoEspañolSpanish
Europe
DeutschlandDeutschGermanFranceFrançaisFrenchΕλλάδαΕλληνικάGreekItaliaItalianoItalianČeská republikaČeštinaCzechPolskaPolskiPolishСрбиjаСрпскиSerbianLatvijaLatviešuLatvianLietuvaLietuviųLithuanianMoldovaMoldoveneascăMoldavianБеларусьБеларускiBelarusian
Transcaucasia
ԱրմենիաՀայերենArmenianАҧсныАҧсышәалаAbkhazХуссар ИрыстонИронауОssetianსაქართველოქართულიGeorgianAzərbaycanАzərbaycancaAzerbaijani
Middle East
Sputnik عربيArabicArabicTürkiyeTürkçeTurkishSputnik ایرانPersianPersianSputnik افغانستانDariDari
Central Asia
ҚазақстанҚазақ тіліKazakhКыргызстанКыргызчаKyrgyzOʻzbekistonЎзбекчаUzbekТоҷикистонТоҷикӣTajik
East & Southeast Asia
Việt NamTiếng ViệtVietnamese日本日本語Japanese俄罗斯卫星通讯社中文（简体）Chinese (simplified)俄罗斯卫星通讯社中文（繁体）Chinese (traditional)
South America
BrasilPortuguêsPortuguese
NewsfeedBreaking
03:00 GMTWreckage of Disappeared An-26 Plane Found in Russia's Khabarovsk Territory - Source
02:20 GMTLavrov Holds 1st Meeting With Truss in New York Amid New UK Accusations Under Skripal Case
01:49 GMTDHS Looks to Staff Gitmo Migrant Facility With Guards Who Speak Haitian Creole Amid US Border Surge
01:30 GMTRussian Crew Leaves Boat Pilgrim in Alaska, Will Renew World Trip Next Spring - Captain
01:00 GMTWall Street Up Broadly as Fed Signals Caution With US Stimulus Taper, Rate Hike
00:45 GMT‘This Moment Demands Action’: Biden Eyes Executive Actions After Fruitless Police Reform Talks
00:26 GMTMoroccan Liberal Parties Form Coalition Government, Ousting Islamists After Decade of Rule
00:00 GMTIAEA Must Have Access to Nuclear Fuel for Australian Submarines - Iranian Envoy
YesterdayFDA Authorizes Pfizer Booster Shots for Elderly, At-Risk Americans
YesterdayTurkey Should Withdraw From Syria, End Occupation of Territories - Syrian Foreign Minister
YesterdayPentagon Says Aware of Reports of Poor Conditions at Military Base Housing Afghans
YesterdayUK Announces Plans to Become AI Innovation Superpower Within 10 Years
YesterdayUS Man Pleads Not Guilty to Capitol Bomb Threat After Livestreaming Police Standoff
YesterdayCroatian Police Partially Solve Mystery of Lone Woman Found on Island With No Memory
Yesterday‘Earth Looks Fragile from Space:’ Jeff Bezos Pledges $1 Billion to Tackle Climate Crisis
Yesterday‘World’s Coolest Dictator’: El Salvador’s Bukele Changes Branding on Twitter Amid Protests
YesterdayCzech, Hungarian Prime Ministers Slam EU for Poor Border Protection From Illegal Migrants
Yesterday‘We’re Done With Fear’: Florida Appoints Joseph Ladapo as State’s New Surgeon General
Yesterday'Difficult Decision': Facebook Chief Technology Officer to Step Down From Post
YesterdayGrandmothers Know Best: Cristiano Ronaldo’s Mother Believes Her Grandson is a Star in the Making