US, EU Agree to Intensify Work on TTIP Trade Deal in 2016 – Joint Statement 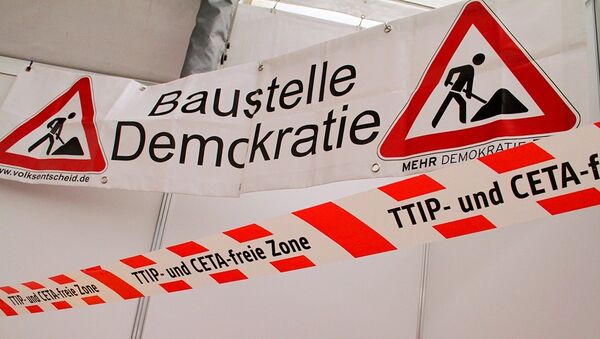 © Flickr / Mehr Demokratie
Subscribe
International
India
Africa
The United States and the European Union agreed to further intensify work on the Transatlantic Trade and Investment Partnership (TTIP) free trade deal in 2016 during talks in Brussels, according to a joint US-EU statement issued on Friday.

"At our meeting today, we agreed to further intensify our work during 2016 to help negotiations move forward rapidly, including through enhanced intersessional work, frequent formal negotiating rounds, and increased Minister level consultations," the statement said.

According to the statement, the parties have made "considerable progress" toward reaching the deal in the past year.

"We are fully committed to expeditiously reaching an ambitious, comprehensive agreement that promotes economic growth and jobs, strengthens our strategic partnership, and reflects our shared values," the statement added.

The TTIP trade deal has faced sharp criticism from activists and policymakers alike for the secretive nature of its negotiations. It aims to deregulate trade between the United States and the European Union, which together comprise 60 percent of global production.

The secretive deal has drawn widespread criticism for its potential to lower environmental, health, safety, and workers’ rights standards, as well as for enabling the extra-judicial settlement of disputes in circumvention of national sovereignty.

The 12th round of US-EU talks is due to be held in early 2016 with the aim of drafting the full text of the agreement before the end of the year.