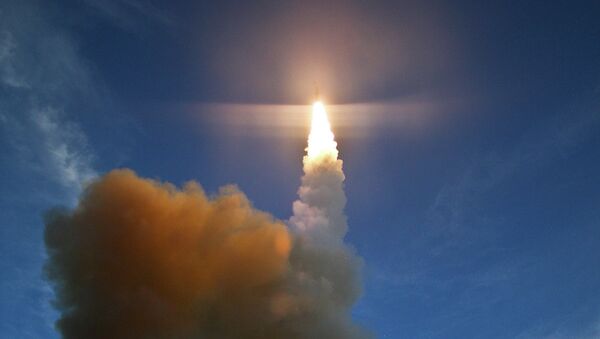 WASHINGTON (Sputnik) – The United States plans to install an Aegis Ashore BMD complex in Romania by the end of 2015, and a similar system in Poland by 2018, according to the MDA.

"Today’s test demonstrated that the same Aegis Ballistic Missile Defense capability that has been fielded at sea and operational for years, will soon be operational ashore as part of the European Phased Adaptive Approach (EPAA) Phase 2 capability in Romania," Syring said Thursday.

The SM-3 Block IB is a kill vehicle that destroys ballistic missiles through high-speed impact.

Raytheon missile systems president, Taylor Lawrence, was quoted on the defense contractor’s website as saying "no matter how you launch it, an SM-3 can hunt down threats in space and destroy them."

"The flexibility to deploy SM-3s from land or sea expands protection options for our combatant commanders and allies around the world," Lawrence stressed.

An SM-3 was for the first time test-fired to intercept and destroy a ballistic missile in the European theater on October 20.

The United States expanded the development and deployment of ballistic missile defense systems following its 2002 withdrawal from the Anti-Ballistic Missile (ABM) Treaty.

The ABM Treaty, signed by the United States and then Soviet Union in 1972, aimed to limit the numbers and locations of both countries’ ABM sites.

The has taken significant steps in deploying ballistic missile defense systems throughout Europe in recent years under the EPAA.

The program includes the deployment of Aegis ballistic missile defense-capable ships deployed in the Mediterranean Sea and Aegis Ashore interceptor sites in Romania and Poland.

Russia has repeatedly expressed concern over the creation of an US-designed ballistic missile defense system in Europe, approved in 2010 during a NATO summit in Lisbon. A group of European countries, including Poland, Romania, Spain and Turkey, agreed to deploy elements of the system on their territories.