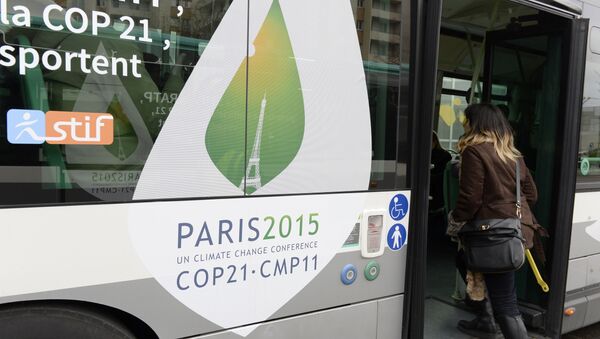 The new draft deal on climate change negotiated in Paris does not look strong enough to meet the ambitious targets that are needed to help stem global warming, the UK chapter of the Friends of the Earth environmental group told Sputnik on Friday.

PARIS (Sputnik), Daria Chernyshova — The climate talks have been extended into Saturday to give the mediators from over 190 countries time to iron out a new global deal on reducing greenhouse gas emissions, due to come into effect in 2020.

"We need to strengthen it as much as possible, but realistically in these last 24 hours that is not going to be possible to the level that we needed because the ambition was never strong enough," Asad Rehman, the group's international head for climate action, said.

Paris Climate Change Draft Deal Includes Many Red Lines
The environmentalist criticized the draft accord for its vague goal of curbing rising temperatures, saying the text made the target of 1.5 degrees Celsius look like nothing more than an "aspirational goal." Dates and targets for efforts to mitigate the effects of climate change have also been removed from the text, he said.

Rehman also told Sputnik that it was crucial that countries’ climate pledges be reviewed between 2020 and 2030.

"When you look at it [draft agreement] altogether, I think what governments are asking us to do is cross our fingers and bet on risky geo-engineering to save the planet at some point, which is actually unprecedented," he said in a separate statement to reporters.

The updated 27-page draft deal seeks to prevent the Earth's average temperature from rising further by capping the permissible temperature rise at below 2 degrees Celsius compared to pre-industrial levels. Many nations have been calling to set the binding target at no more than 1.5 degrees.