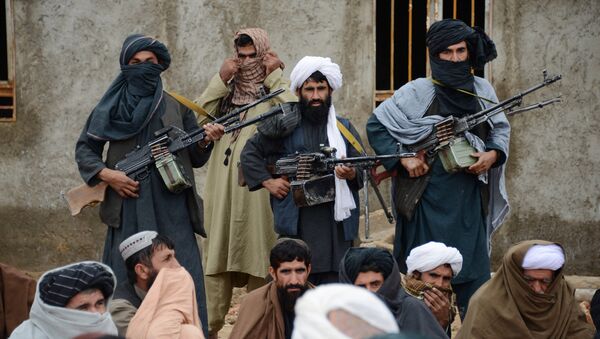 Daesh militants acting in Afghanistan may use the country for arms smuggling and human trafficking, according to Sidiqollah Tauhidi, a member of the consultative council of the Afghan Interior Ministry.

Tauhidi recalled that the vast majority of members of Daesh are former Taliban militants who "changed their position, but who continue to destroy, destabilize… and kill civilians."

According to Tauhidi, the fear is that Daesh may get financial and personnel support from Central Asian countries, which could be captured by the militants. 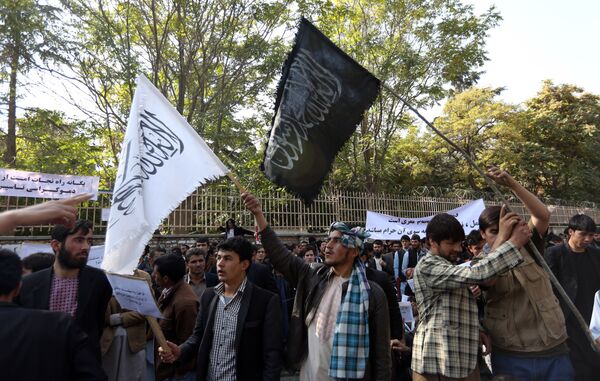 In this Saturday, Oct. 25, 2014 photo, Afghan university students wave a black flag used by the Islamic State group and a white flag used by Taliban during its 1996-2001 rule of Afghanistan at a demonstration in Kabul, Afghanistan
© AP Photo / Rahmat Gul

"This worst-case scenario may see the transformation of Afghanistan into a transit route for the smuggling of arms, minerals and people from the Middle East to Central Asia," Tauhid said.

In this connection, he pointed the finger at Pakistan, which he said maintains contact with the Taliban and Daesh, directing their actions in Afghanistan.

"In Syria, Russia proved that it is up in arms against terrorism. Russia's borders adjacent to Central Asia are currently under threat of a terrorist invasion. This is a big headache for Moscow," Tauhidi said.

Defeating Daesh in Afghanistan May Require a Deal With the Devil
According to him, Russia should first of all wrap up its air campaign against Daesh in Syria and then focus on these militants in Afghanistan, where he said Russia may develop better coordination with Western countries fighting Daesh.

Meanwhile, The Times reported late last week that Daesh  had captured four districts in eastern Afghanistan, with 1,600 local militants pledging their allegiance to the terrorist group.