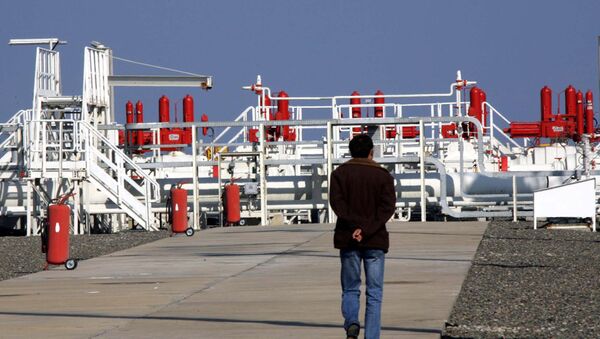 © AFP 2021 / MUSTAFA OZER
Subscribe
Turkey has no suitable alternatives to Russian gas which would allow it to endure the ongoing standoff between Moscow and Ankara, according to prominent Turkish energy expert Necdet Pamir.

Necdet recalled that relations between Moscow and Ankara deteriorated after the downing of a Russian bomber Su-24 by Turkish F-16 fighter jets over Syria in late November.

In light of this, Ankara does not rule out that Russia may halt its gas supplies to Turkey at any moment, which has prompted it to seek out a suitable alternative to Russian gas as soon as possible, Necdet said. Turkey obtains about 60% of the natural gas supplies it obtains abroad from Russia.

He poured cold water on the Turkish media's speculations that Qatar, Iraq and Azerbaijan could be seen as three alternatives to Russia in this regard.

"While it's quite unlikely that Russia will soon stop its gas supplies to Turkey, if it were the case, an objective analysis of Turkey's import infrastructure shows that these 'options' are neither valid nor even possible solutions," Necdet said.

Regarding Qatar, he explained that "even if Qatari gas were purchased, it would be impossible to put the gas into Turkey's gas network."

"Therefore, claiming that Qatari gas would be an alternative to Russian gas is merely lip service and nothing more," Necdet pointed out.

As for Azerbaijan, its current gas export potential is also limited, Necdet said, referring to the 2012 agreement on the Trans-Anatolian Pipeline, which is expected to be in operation as early as 2018.

As far as northern Iraq is concerned, he said that "there is physically no gas import potential available at the moment, nor will there be in the short and medium term."

Necdet concluded by saying that the initial impact of non-energy Russian sanctions against Turkey is expected to stand at about 6.5 billion dollars.He described it as "just the tip of the iceberg", given that "there are many methods a large state like Russia can use to harm Turkey."

000000
Popular comments
Russia should not turn the taps off. Just charge them double. And do not forget to smile :)
10 December 2015, 13:28 GMT1
000000
I said from the start that turkeys leader was an idiot and not a critical thinker.
Mitach2002
10 December 2015, 13:38 GMT1
000000
Newsfeed
0
New firstOld first
loader
LIVE
Заголовок открываемого материала
Access to the chat has been blocked for violating the rules . You will be able to participate again through:∞. If you do not agree with the blocking, please use the feedback form
The discussion is closed. You can participate in the discussion within 24 hours after the publication of the article.
To participate in the discussion
log in or register
loader
Chats
Заголовок открываемого материала
Worldwide
InternationalEnglishEnglishMundoEspañolSpanish
Europe
DeutschlandDeutschGermanFranceFrançaisFrenchΕλλάδαΕλληνικάGreekItaliaItalianoItalianČeská republikaČeštinaCzechPolskaPolskiPolishСрбиjаСрпскиSerbianLatvijaLatviešuLatvianLietuvaLietuviųLithuanianMoldovaMoldoveneascăMoldavianБеларусьБеларускiBelarusian
Transcaucasia
ԱրմենիաՀայերենArmenianАҧсныАҧсышәалаAbkhazХуссар ИрыстонИронауОssetianსაქართველოქართულიGeorgianAzərbaycanАzərbaycancaAzerbaijani
Middle East
Sputnik عربيArabicArabicTürkiyeTürkçeTurkishSputnik ایرانPersianPersianSputnik افغانستانDariDari
Central Asia
ҚазақстанҚазақ тіліKazakhКыргызстанКыргызчаKyrgyzOʻzbekistonЎзбекчаUzbekТоҷикистонТоҷикӣTajik
East & Southeast Asia
Việt NamTiếng ViệtVietnamese日本日本語Japanese俄罗斯卫星通讯社中文（简体）Chinese (simplified)俄罗斯卫星通讯社中文（繁体）Chinese (traditional)
South America
BrasilPortuguêsPortuguese
NewsfeedBreaking
22:38 GMTAlternative for Germany to Continue Supporting Nord Stream 2 After Election - Co-Chairman
22:01 GMTMilitants in Aleppo Tried to Force Way From Turkish-Controlled Area - Russian Military
21:48 GMTGermans See No Use to Vote for CDU Without Merkel at Helm - Afd Politician
21:19 GMTGerman Conservatives Suffer Catastrophic Defeat in General Election – Senior Official
21:00 GMTGermany's FDP Leader Hints at Coalition Talks With Greens
20:45 GMTMacron Files Complaint Against Paparazzi for Invasion of Privacy - Reports
20:16 GMTTwitter Removes Blue Verified Badge From Accounts of Several Afghan Ministries - Reports
20:00 GMTLaschet, Scholz Want Coalition Talks to End by Christmas
19:41 GMTCIA Was Ready to Start Firefight in London to Prevent Russia From Busting Out Assange, Media Claims
19:20 GMTSuicide Pact? Top Labour Remainer Says Party Should Campaign to Rejoin EU
18:58 GMTVideo: Miss France 2019 Confronted by 'Teenage Gang' That Threw Stones at Her in Paris
18:47 GMTFree For All! Enraged Moped Drivers Fight in London Amid Lack of Fuel - Video
18:39 GMTPSG's Kylian Mbappe Caught on Camera 'Lamenting Neymar Would Not Give Him Passes'
18:35 GMTPowerful 5.7-Magnitude Earthquake Hits Philippines' Largest Island Luzon
18:00 GMTInfrastructure Plan: Pelosi Says She 'Never' Brings a Bill to Floor 'That Doesn't Have the Votes'
17:43 GMTUsyk vs. Fury? Gypsy King's Twitter Like Leaves Fans Buzzing About Possible Heavyweight Clash
16:50 GMTLabour Leader Demands Visas For 100K Foreign Lorry Drivers Amid Global Shortage
16:33 GMTLabour Staff Cuts That Prompted Strike Ballot Due to £2m-a-Year Legal Costs
16:23 GMTDHS Chief Reveals Up to 12,000 Haitians Who Crossed Southern Border Were Released Into US
16:21 GMTTurkey Wants US Military to Leave Syria, Iraq After Afghanistan Withdrawal, Erdogan Says