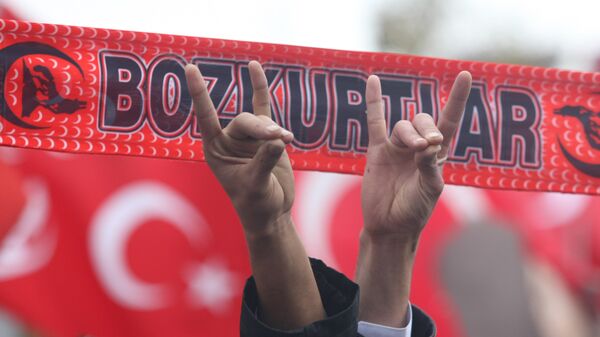 © AFP 2023 / ADEM ALTAN
Subscribe
International
India
Africa
Over the past several days, Russian analysts have been investigating rumors that members of Turkey's extreme right-wing nationalist Grey Wolves movement, the same organization which claimed responsibility for killing a Russian pilot in Syria last month, have found their way into southern Ukraine. But are they a threat to Crimea?

Last weekend, Lenur Islyamov, the Tatar nationalist thought to be one of the main organizers of the so-called Crimean food and energy blockade, posted a photo of himself with what appeared to be members of the Grey Wolves, the militant organization considered to be the 'unofficial militant arm' of Turkey's extreme-right-wing Nationalist Movement Party, on his Facebook page.

The photo features Islyamov, surrounded by four men, three of them gesturing the group's symbol –the so-called 'face of the wolf', with their hands. The description reads "Turkish patriots from the Bozkurtkar, Turk ulkuculeri – known among the people as simply the Grey Wolves, visiting us at the blockade. The ring around the blockade is tightening!"

Light Up, Crimea! 'Electricity Bridge' Goes Online
Commenting over the past few days on what the post may imply, some Russian experts have suggested that it could be an implicit indication that the Crimean Tatar nationalists who coordinated with Ukraine’s notorious Right Sector militant group to launch a farcical 'food blockade' of Crimea in September, and a more serious 'energy blockade' in late November, have begun to receive reinforcements from terrorist groups in Turkey.

So just who are the so-called Grey Wolves, and what does their possible presence in southern Ukraine mean as far as Crimea’s safety is concerned?

To begin with, it’s worth recalling that Alparslan Celik, the so-called 'Turkmen commander' who boasted that he killed the pilot of the Russian Su-24 downed over Syria by the Turkish Air Force last month, is allegedly a Turkish national, and a member of the Grey Wolves.

Formed in the late 1960s as the youth wing of the extreme-right-wing Nationalist Movement Party, whose proclaimed goal is to unite all Turkic peoples in one state, the Grey Wolves were initially led by Colonel Alparslan Turkes, an open admirer of the ideas of Adolf Hitler and the Nazis. The group became one of the main nationalist terrorist organizations during the era of political violence which plagued Turkey from 1976 until 1980, effectively becoming a death squad engaged in the killings of trade unionists, journalists, activists from the Kurdish movement, communists and various 'objectionable' officials.

Meet Syrian Rebel Commander Who Bragged About Killing Russian Su-24 Pilot
The organization is known for having staged a massacre in Istanbul during the May Day demonstrations in 1977, and over the years its militants have killed thousands of civilians in Kurdish areas; the Grey Wolves are also believed to have been involved in the assassination attempt on John Paul II in 1981.

Today, the Grey Wolves are believed to be actively collaborating with the terrorist underground in China's northwest autonomous territory of Xinjiang, considering the region part of the 'Great Turan' (the idea of a single state for the Turkic people). In August 2015, the Grey Wolves staged a bomb attack in Bangkok, killing 19 and injuring 123, over the Thai government's decision to deport Uyghur terrorist suspects back to China instead of allowing them to travel to Turkey, where they would have received asylum. In Europe, Grey Wolves members have been involved in political killings of Kurds, have defiled Armenian monuments, and beat up Chinese tourists. In recent years, the group has been accused of recruiting fighters for the war in Syria.

The Grey Wolves appeared in the post-Soviet space immediately following the collapse of the Soviet Union. Their fighters fought in Nagorno-Karabakh against Armenia during the Armenian-Azerbaijani conflict, fighting on the side of the separatists and terrorists in Chechnya against Russia later in the decade.

According to independent Russian newspaper Svobodnaya Pressa, the fact that radical Crimean Tatar nationalists now appear to have begun cooperating with the Grey Wolves is not surprising, especially given the worsening relations between Russia and Turkey.

According to the newspaper, there unconfirmed reports suggest that there may be dozens or even hundreds of Grey Wolves-affiliated fighters in Ukraine's Kherson region, which borders Crimea to the north. "In Kherson," the paper suggests, "the Wolves have plans to create a sort of 'Tatar Republic'." The paper warns further that "given the threats which have been issued by the radicals, their presence around the border with Crimea should be taken very seriously."

Moreover, Svobodnaya Pressa says that there are signs that the Grey Wolves may be affiliated with Turkish officials. The paper points to the fact that Mustafa Dzhemilev, a Ukrainian politician and one of the leaders of the Mejlis, a Crimean Tatar political movement claiming to represent all of Crimea's Tatars, participated in the World Congress of the Crimean Tatar People, held in Ankara in August. In September, the Mejlis joined with the Right Sector ultranationalists to organize the so-called Crimean 'food blockade'.

"At that time," the paper notes, "everyone laughed" over the blockade's foolishness, "because the action affected Ukrainian entrepreneurs more than anyone else. But few took note of the fact that Turkish food exports to the peninsula immediately increased four times. According to some media reports, Lenur Islyamov, one of the blockade's organizers" (and the one posting photos of himself on Facebook posing with the Grey Wolves) had received $500,000 from the Turks. Earlier, Turkey provided content and financial support for ATR, a Crimean Tatar television channel owned by Islyamov."

“It is known that some of the leadership of the Crimean Tatars –including Mustafa Dzhemilev, have long been living off Turkish money," Migranyan noted. "They are supported by a variety of Turkish organizations, including Turkey's intelligence services and nationalist organizations. It is also no secret that on all the maps of Turkish nationalists, Crimea is seen as a part of a new Turkish Empire, and the idea is that with time, it must become part of a single Turkic state.”

“This," the analyst suggested, "is the situation in which Turkish nationalists in the face of the Grey Wolves and radicals of the Crimean Tatar nationalist organizations were able to converge. Both saw the increasing tension in the region, and saw in it the potential to destabilize the situation.”

Speaking with Svobodnaya Pressa, Viktor Nadein-Raevsky, a senior research fellow at the Moscow-based Institute of World Economy and International Relations, warned that for its part, Ukraine must be extremely weary of cooperating with a terrorist organization like the Grey Wolves.

"When it comes to the Grey Wolves, one should expect anything. This is a very strong organization which has legal branches in Germany and the Netherlands," the analyst noted. "In Turkey, they are formally banned, but as we can see, they can operate quite freely in neighboring Syria. Recently, the Grey Wolves appeared in Ukraine, publically demonstrating their intensions alongside the 'Dzhemilevists'."

Washington Remains Blind to Ankara's Complicity in Terrorism
"The Grey Wolves," Nadein-Raevsky notes, "have big plans, and they will stop at nothing to try to achieve them. It's necessary to understand that this is a pro-fascist, terrorist organization, dedicated toward the creation of the Great Turan State, as taught by the Grey Wolves' ideological leader, Alparslan Turkes."

According to the analyst, "it's difficult to estimate at the moment exactly how many 'Wolves' there are today. Prior to the 1980 coup in Turkey, there were between 200 to 400 thousand; after that, verified information was no longer available. The group has its own training camps; it is a very modern organization."

Ultimately, Nadein-Raevsky believes that as a terrorist group, "by and large, the 'Wolves' are little different from Daesh (the terrorist group also known as ISIL). The main difference is ideological –they are based not in Islamism, but on Turkish nationalism."

Asked whether Turkey's leadership has any intention of using the Grey Wolves to pursue its own policy goals abroad, the analyst emphasized that "Turkey is capable of anything; the question of whether the country's leadership has any integrity is not an issue…Turkish law requires them to prosecute the Grey Wolves, but in reality they remain free to operate…We have already seen this in Syria. Turkish authorities maintain contact with the Wolves, and use them, when necessary. Therefore, their appearance in Ukraine or in Crimea is a real possibility."

Asked just how seriously Crimean authorities should take the threat of Ukrainian radicals joining with the Grey Wolves in efforts to destabilize the peninsula, Nadein-Raevsky noted that "from [the radicals'] side, there is a great deal of bragging. But our special forces also know how to shoot. They are very much aware of the problem, and are able to cope with the task" of protecting the region. "They have the means to do so."

Ultimately, commenting on the presence of the Grey Wolves in southern Ukraine, Professor Migranyan believes that in the current situation, he “cannot rule out that this measure serves the interests of the Ukrainian intelligence services, and the current authorities in Ukraine as a whole, because it all has an anti-Russian orientation; in this situation, they are interested in rallying on their side the broadest possible forces, even if these forces belong to terrorist organizations.”

Nadein-Raevsky warns that if Ukrainian authorities and radicals continue to play with fire, they are the ones who will get burned. According to the analyst, the Grey Wolves are a danger, first and foremost, "to Ukraine itself. They have an extreme obsession with Turkic nationalism. The Grey Wolves never had any respect for other peoples. To them, all Slavs are their ideological enemies. Right now, the Grey Wolves are negotiating with the Ukrainian nationalists, but they are always thinking that there will be time to turn against them and cut their throats later. And that they will stop at nothing is a well-known fact."