It's All About the Bases: US Ready to Roll Out More 'Hubs' to Fight Daesh 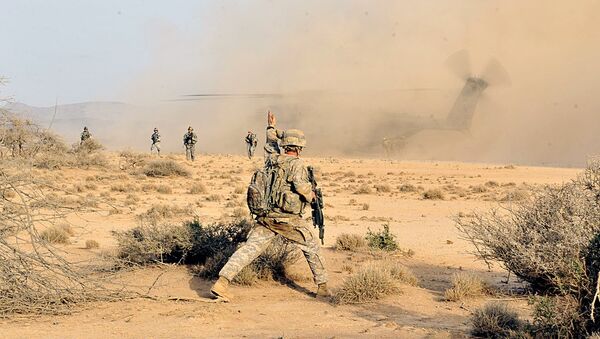 The proposed new bases would consist of four “hubs” that would expand on existing US bases in Djibouti and Afghanistan with anywhere from 500 to 5,000 troops, according to media.

US-led Coalition Launches Three Anti-Daesh Airstrikes in Syria, 20 in Iraq
WASHINGTON (Sputnik) — The US military is considering building a cobweb of bases in Africa, Southwest Asia and the Middle East to gain more intelligence and act against the Islamic State and other terrorist groups, media reported on Thursday.

“[S]enior military officials have told the White House that the network of bases would serve as hubs for Special Operations troops and intelligence operatives who would conduct counterterrorism missions for the foreseeable future,” the New York Times reported.

The proposed new bases would consist of four “hubs” that would expand on existing US bases in Djibouti and Afghanistan with anywhere from 500 to 5,000 troops, according to the report. In addition, smaller “spokes” will be established in countries such as Niger and Cameroon that would have more basic installations.

Daesh Is Spawn of US Regime Change and Saudi Wahhabism – Engdahl
The bases would attempt to “bring an ad hoc series of existing bases into one coherent system” capable of fighting regional threats from the Islamic State to al-Qaeda, and prevent potential assaults on US diplomatic facilities such as the one in Benghazi, Libya.

The proposal has been a topic of much discussion, officials told the New York Times, including this week, during a White House meeting of President Barack Obama’s cabinet. However, senior Department of Defense officials say the proposal is still in its early stages of being considered.