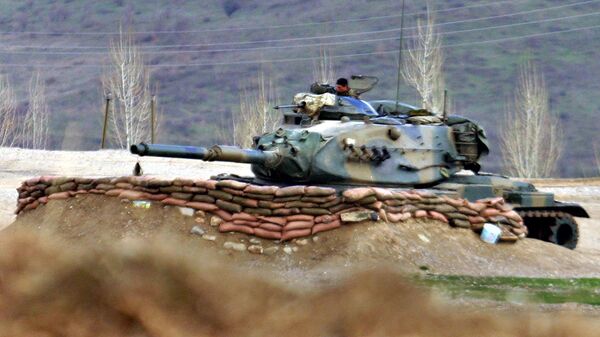 The countries of Europe and Asia are expected to side with Iraq if it complains to the UN Security Council about Turkey's incursion, and the battle for Iraq and Syria is the result of an outburst of radical Islamism, expert Daniel Pipes told Sputnik.

The Iraqi government will receive a sympathetic hearing at the UN, if it decides to complain to the Security Council about Turkey's decision to send reinforcements including a 25-tank battalion and hundreds of soldiers to one of its units in northern Iraq last week, Daniel Pipes, president of the Middle East Forum, told Sputnik.

​"Many states are really upset with Ankara and that could well show up in a UN discussion. Nominally the NATO allies of Turkey have supported it in the confrontation with the Russian air force, but in fact there's a lot of grumbling; no-one is happy about this confrontation."

"The Turks have brought NATO into a situation where it doesn't want to be, so there's resentment."

"That's just one of many different resentments; the Europeans are deeply upset about the fact that the Turks have allowed these illegal immigrants to go into by the hundreds of thousands Europe."

"For example, the Chinese government is upset that the Turks are supporting a Turkish liberation movement in western China."

The complexity of the crisis in Iraq and Syria is demonstrated by Turkey's relationship with the Kurds of northern Iraq, said Pipes, an expert on the Middle East and Islam.

Lavrov Asks Why Turkey is Bombing US-Allied Kurds in Syria
Though the Turkish government has significant problems with its own Kurdish population and the Kurds in Syria, it has a good relationship with the Kurds in Iraq, which it "has been using as a vehicle to oppose the Shiite-dominated government in Baghdad."

The Kurds in northern Iraq take a "quite benign" view of having Turkish soldiers in their region, said Pipes; around 15-20 percent of the Turkish population is Kurdish.

"They don't mind having fellow Sunnis in Iraq. They're worried about ISIS (Daesh), but not particularly worried about the Turks there."

Russia Ready to Work With France, Iraq, Jordan to Close Turkey-Syria Border
Pipes believes that the main source of conflict in the region has been the resurgence of radical Islamism among both Sunnis and Shias over the past few decades.

"The basis confrontation is between the Sunni bloc of Saudi Arabia, Qatar and Turkey on the one hand, and the Shiite bloc, of Iran, Hezbollah and other smaller groups on the other."

"They're fighting in Yemen, they're fighting in Syria, in Iraq, potentially in Lebanon, and this is the driving force of Middle East politics today," due to the resurgence of radical Islamism on both sides, and "upping of the stakes, antagonism and bellicosity that we are seeing play out in Syria and Iraq," said Pipes.