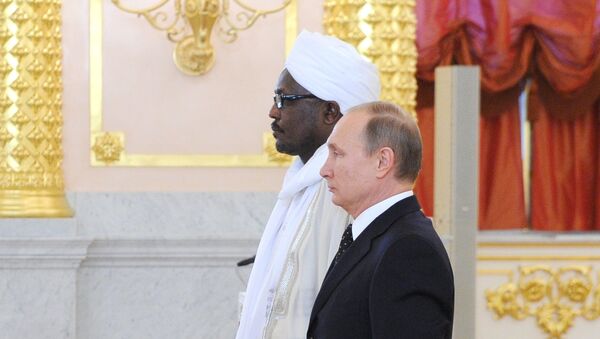 © Sputnik / Michael Klimentyev
/
Go to the photo bank
Subscribe
Ambassador to Russia Nadir Babiker said that Khartoum appreciates the way the Russian media covers developments in the Republic of Sudan.

"We highly appreciate how the Russian media cover the events in Sudan," the envoy said at a press conference at the Rossiya Segodnya International Information Agency.

Russia and the Republic of the Sudan maintain a strong economic and political partnership. Last month, the countries agreed on dozen of contracts, including on the geological mapping of Sudan’s natural resources.

Oil-rich South Sudan seceded from the Republic of Sudan in 2011. The two countries have not been able to agree on several issues, including the definition of their shared border and the holding of a referendum on the status of the disputed oil-rich border area of Abyei.

Sudanese forces have been battling several militias in the Western Sudan region of Darfur since 2003. The conflict has killed tens of thousands, and over two million people have been displaced, according to UN estimates.

Russian companies can use Sudan as the entry gates to the African continent, Nadir Babiker said.

"Sudan is the gates to Africa for Russia," the envoy said at a press conference at the Rossiya Segodnya International Information Agency.

He added that the Sudanese economy was developing but stressed that South Sudan secession delivered a serious blow to the budget as the split decreased the county's oil income by some 75 percent.

Oil-rich South Sudan seceded from what is now the Republic of Sudan in 2011. The two countries have not been able to agree on several issues, including the definition of borders and conducting a referendum on the status of the disputed oil-rich border area of Abyei.

A Russian-Sudanese intergovernmental commission on trade and economy is due to hold a regular meeting in Khartoum on December 20, Ambassador of Sudan to Russia said.

"Our bilateral relations are developing… The next meeting of the intergovernmental committee attended by [Russian Natural Resources Minister Sergei] Donskoi and our resources minister will take place on December 20," Babiker said at a press conference at the Rossiya Segodnya International Information Agency.

The Russian-Sudanese Intergovernmental Commission on Trade and Economic Cooperation will be meeting for three days in the Republic of the Sudan’s capital Khartoum.

"Sudan believes that Russian technologies in this [oil] sector are quite advanced and modern. Unfortunately, these days because the prices of oil and gas are relatively low, it does not encourage the investors," Babiker said.

The ambassador also provided several examples of successful bilateral cooperation in the sector.

"We offered a consortium to a Russian company and they went to Sudan. They inspected the area and they chose one block, now waiting to get the geological information about the reserves. There is another company, they signed a memorandum of understanding… to explore in Sudan," Babiker said, also mentioning cooperation of Russia’s GTL company with Sudan’s Sudapet.

Sudan and Russia will soon switch to conducting investment transactions in Russian rubles in the near future, Sudanese Ambassador to Russia Nadir Babiker told Sputnik on Wednesday.

"The economic relations [between Russia and Sudan] are witnessing a real breakthrough, real development. Regarding financial investments, there is now an agreement to exchange and transfer using the Russian ruble. This will happen very soon, actually. I’m expecting that the cooperation is very promising," Babiker said.