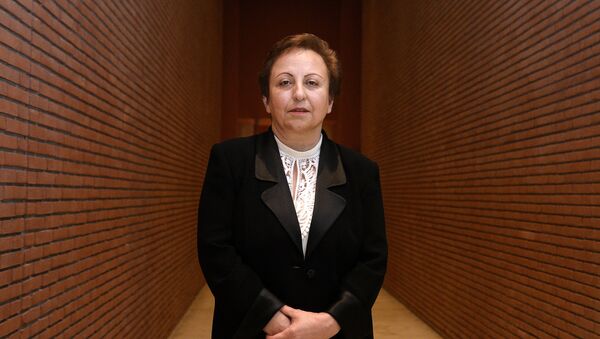 © AFP 2021 / TIZIANA FABI
Subscribe
Iranian human rights activist and lawyer said that it is necessary to fight the causes of terrorism instead of its consequences.

SCO Gov't Heads to Discuss Counter-Terrorism at Annual Meeting in China
BARCELONA (Sputnik) – It is necessary to fight the causes of terrorism instead of its consequences, as terrorism can not be defeated by means of war, a prominent Iranian human rights activist and lawyer said Tuesday.

"The murder of one or several terrorists will not solve the problem. The world experience of fighting against the Taliban movement tells us that. Look what happened after September 11, when the Taliban was destroyed, but terrorism only expanded. It is necessary to fight against the roots [of terrorism]," Shirin Ebadi told RIA Novosti in an interview.

Ebadi, who received the Nobel Peace Prize in 2003 for promoting human rights, said that the way to fight terrorism was through education rather than more violence.

"The world is currently repeating an experiment which has already failed. That is why we say, drop books on the Islamic State instead of bombs. Bombings will not destroy terrorists," Ebadi said.

According to Ebadi, at least two factors facilitate terrorism — dictatorships and injustice.

The Daesh, also known as ISIL/The Islamic State terrorist group, which has been outlawed in Russia and many other countries, controls vast territories of Syria and Iraq and is currently considered to be a major threat to global security.

A US-led international coalition of around 60 nations has been conducting airstrikes against Daesh targets in Iraq and Syria since August 2014, without the approval of the Syrian authorities of the UN Security Council.

Russia has also been conducting airstrikes against terrorists in Syria since September 30, following a request from President Bashar Assad.

000000
Popular comments
Wanna hear a joke? Nobel Peace Prize.
dvdgrg09
8 December 2015, 16:05 GMT
000000
Shirin Ebadi lives in the UK and is critical of the government of Iran. So it is no surprise she reinforces the narrative the west is fighting AGAINST terrorism when it must be obvious to a blind turtle western powers employ terrorism to try to continue their hegemony. Why did Sputnik not provide appropriate background to the piece? If Sputnik is the best we have to wage an information war against the Nazis who rule the west then we are in deep trouble.
gmpratt
8 December 2015, 19:14 GMT1
000000
Newsfeed
0
New firstOld first
loader
LIVE
Заголовок открываемого материала
Access to the chat has been blocked for violating the rules . You will be able to participate again through:∞. If you do not agree with the blocking, please use the feedback form
The discussion is closed. You can participate in the discussion within 24 hours after the publication of the article.
To participate in the discussion
log in or register
loader
Chats
Заголовок открываемого материала
Worldwide
InternationalEnglishEnglishMundoEspañolSpanish
Europe
DeutschlandDeutschGermanFranceFrançaisFrenchΕλλάδαΕλληνικάGreekItaliaItalianoItalianČeská republikaČeštinaCzechPolskaPolskiPolishСрбиjаСрпскиSerbianLatvijaLatviešuLatvianLietuvaLietuviųLithuanianMoldovaMoldoveneascăMoldavianБеларусьБеларускiBelarusian
Transcaucasia
ԱրմենիաՀայերենArmenianАҧсныАҧсышәалаAbkhazХуссар ИрыстонИронауОssetianსაქართველოქართულიGeorgianAzərbaycanАzərbaycancaAzerbaijani
Middle East
Sputnik عربيArabicArabicTürkiyeTürkçeTurkishSputnik ایرانPersianPersianSputnik افغانستانDariDari
Central Asia
ҚазақстанҚазақ тіліKazakhКыргызстанКыргызчаKyrgyzOʻzbekistonЎзбекчаUzbekТоҷикистонТоҷикӣTajik
East & Southeast Asia
Việt NamTiếng ViệtVietnamese日本日本語Japanese中国中文Chinese
South America
BrasilPortuguêsPortuguese
NewsfeedBreaking
10:41 GMTUK Experts 'Know’ Location of Crashed F-35 Jet As Security Aspects Prompt 'Cautious' Recovery
10:36 GMTFirst Meeting of WHO Body to Discuss New Pandemics Treaty to Be Held on 1 March, WHO's Tedros Says
10:33 GMTYenisey Siberia Aims to Become an International Tourism, Sports & Business Destination
10:02 GMTFrance Wants EU to Intervene in Fishing Row With UK if Talks Fail
09:48 GMTLavrov: Lukashenko's Statement About Russian Nuclear Arms in Belarus is 'Serious Warning' to West
09:47 GMTGunners Fans Concerned After Arsenal Defender Gabriel Assaulted by Masked Thugs
09:43 GMTAs Mississippi Abortion Case Heads to Supreme Court, Dem Warns of Revolution if Roe v Wade Repealed
08:59 GMTScientists at Hong Kong University First in Asia to Isolate Omicron Coronavirus Variant
08:38 GMTRussian Foreign Ministry: US Embassy Staff Deployed in Moscow for Over 3 Years Must Leave by 31 Jan
08:34 GMTJapan Makes Representation to US Over Fuel Dump From F-16 Fighter Jet Near Residential Areas
08:26 GMTPriyanka Chopra Shares How She and Nick Jonas Made Their Marriage Work Amid 'Really Tough' Schedule
07:39 GMTUkraine Pulling Armed Forces to Conflict Zone in Donbass, Moscow Warns
07:30 GMTDonald Trump Slams Meghan Markle as 'Disrespectful' to Queen, Says Prince Harry Was 'Used Horribly'
07:20 GMTCOVID-19 Live Updates: Germany Reports Four Fully Vaccinated People Infected With Omicron Variant
06:51 GMTLawyer for Epstein 'Sex Slave' Claims Prince Andrew's 'Car-Crash' Interview is Evidence of His Guilt
06:37 GMTDenmark First Nation to Introduce 'Pioneering' New Doping Test
06:22 GMTConstruction of World's Longest Underwater Tunnel Underway Between Germany and Denmark
06:21 GMTNigeria Finds Omicron in October Sample After Retrospective Sequencing of Previously Confirmed Cases
06:13 GMTBelarus Will Support Russia in the Event of Aggression From Ukraine, Lukashenko Says
06:00 GMTMuch of Israel's Plastic Waste Left to Pile Up as Authorities Have No Clear Recycling Policy