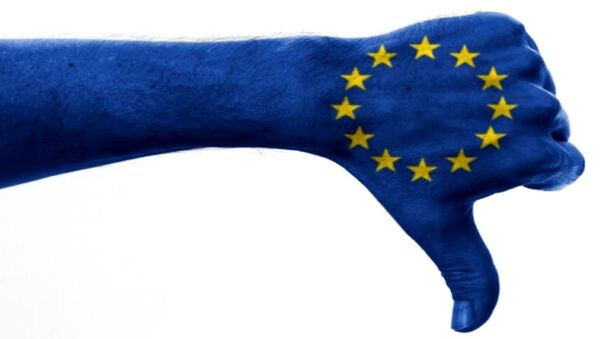 © Flickr / EU Exposed
Subscribe
The European Union is in danger of falling apart and supporters must fight to keep it alive, European Parliament President Martin Schulz has said in a dire assessment of the growing anti-EU sentiment across the continent.

With the ongoing economic troubles of many member states, along with the refugee crisis stirring Euroskepticism, Schulz said that the bloc was in danger due to active forces trying to pull it apart.

"No one can say whether the EU will still exist in this form in 10 years' time. If we want that then we need to fight very hard for it," Schulz told German newspaper Die Welt.

Schulz's comments were in response to warnings from Luxembourg's foreign affairs and migration minister Jean Asselborn, who warned that the bloc could dissolve.

Many critics have poured doubt on the EU's ability to exist in it's current state following the refugee crisis, which has widened divisions between member states and led to numerous breaches of the bloc's Schengen free movement zone.

Up until recent dramas enveloped the bloc, many believed the EU was irreversible, however Schulz said it "could of course be reversed" noting that growing nationalism could lead to the resurrection of borders and walls between member states.

"That would be disastrous because that kind of Europe has repeatedly led our continent into catastrophe," Schulz added.

The anti-EU sentiment across Europe was highlighted by the rise of the French Euroskeptic anti-immigration party the National front (FN), who smashed open France's two-party system and won the first round of the country's regional elections.

This followed the recent electoral victory of the Euroskeptic Law and Justice party in Poland, while in Britain, the public will vote on whether to remain in the EU in a referendum before the end of 2017, amid significant anti-EU sentiment in David Cameron's ruling Conservative party.

While there has been anger at Brussels on the right of European politics over immigration issues, the bloc's handling of economic affairs and insistence on austerity has spawned a left-wing rebellion.

This was highlighted in January when Greece's Syriza party swept to power on the back of an anti-austerity agenda, and subsequently got involved in a highly publicized showdown with EU officials.

During the summer's negotiations, Greece was threatened with expulsion from the euro currency, while the EU's frustration at Athens' handling of the refugee crisis has led to calls for Greece to be suspended from the Schengen zone, with critics suggesting it could trigger the dissolution of the EU.

000000
Popular comments
A whole political elite is created together with the EU. This elite enjoy's very royal luxury positions. The European citizens don't get to vote on them, but guess who's paying for their luxury lifestyles. The funny thing is 20 years ago there was no need fur such an 'organisation' and everything was working fine aswell. The country's could choose their own laws, but this right is getting minimized every day by the EU.
rene.sans
8 December 2015, 16:20 GMT3
000000
anne00marie, the problem is not that. is the lack of respect for each people ... and most of european are not NAZIS but don t want moslims in europe because it will end in ab Islamic nazist union.