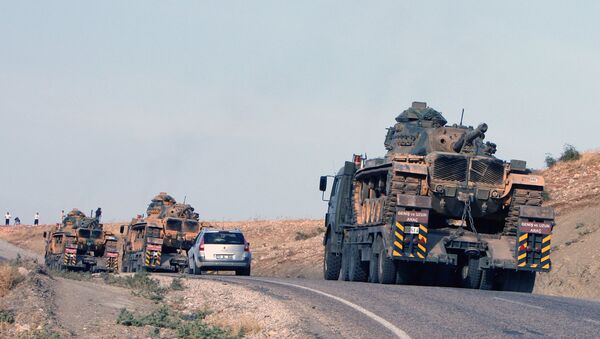 The Iraqi government cannot rely on the Arab League states in the issue of the withdrawal of Turkish forces from the country, as the bloc is virtually unable to take real action, an Iraqi senior lawmaker said on Tuesday.

Iraq May Take Economic Measures Against Turkey if Troops Not Withdrawn
BAGHDAD (Sputnik) – On December 4, Turkey deployed up to 150 military personnel to northern Iraq's Nineveh province, without Baghdad’s approval, allegedly to provide training to Kurdish militia who are fighting extremists. Arab League Secretary General Nabil Elaraby on Sunday condemned what he called Turkey's blatant invasion of Iraq, noting that only the UN Security Council could facilitate the withdrawal of the Turkish troops.

"The Iraqi government should not rely on the statement by the Arab League, but rely on Baghdad's own strength," Khalid Asadi, a member of the International Relations Committee of the Iraqi Parliament, said in a statement obtained by Sputnik.

The condemnation by the Arab League was expected, but given that the system of pan-Arab defense was destroyed a few decades ago, "the Arab League's statement about it is just a facade," the lawmaker added.

The UN Security Council will meet on Tuesday to discuss the issue of Turkish troops entering Iraq, a UN source told RIA Novosti.

Large areas of Iraq and neighboring Syria have been occupied by Islamic State militant group, or Daesh in Arabic. It denounces Shia Muslims, who make up almost 70 percent of the Iraqi population, as infidels. The terrorist group, which is outlawed in Russia, has carried out numerous terror attacks and committed many human rights atrocities, not only on the occupied territories, but worldwide.

Amid Turkey's deploying its troops in Iraq, the government in Baghdad has warned that it is ready to take appropriate measures against the Turkish forces if Ankara does not pull its troops out of the country by the deadline set out by the government, which is late Tuesday.