Turkey Refuses to Withdraw Its Troops From Northern Iraq Despite Ultimatum 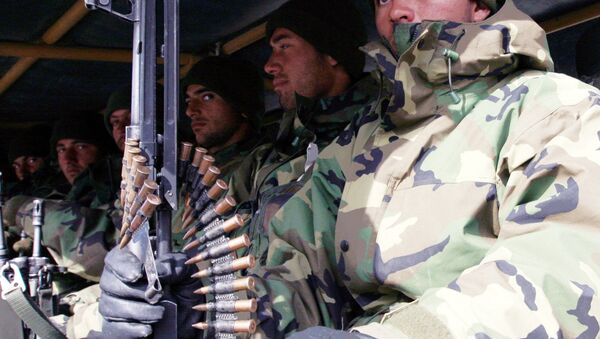 © AP Photo / Burhan Ozbilici
Subscribe
In the face of fierce protests from the Iraqi government and the international community, Turkey is refusing to withdraw troops from northern Iraq.

Over the weekend, Ankara deployed approximately 600 additional troops to a camp in Iraq’s Ninevah province, close to the city of Mosul.

"It is our duty to provide security for our soldiers providing training there," Turkish foreign minister, Mevlut Cavusoglu, told Kanal 24. "Everybody is present in Iraq…The goal of all of them is clear. Train-and-equip advisory support is being provided. Our presence there is not a secret."

But the Iraqi government, viewing the move as a clear breach of sovereignty, condemned the action, and gave Turkey 48 hours to remove its troops.

But Turkey has refused to comply with the order, insisting it informed the Iraqi government of its actions, and that there was demand for Turkish support in the area.

"The military personnel for training will stay. Not because we them [there] particularly but because there is a demand from the Iraqi side," a Turkish official told reporters, according to the Guardian. "The discussion with the central government still continues."

Iraq had previously indicated that if Turkey failed to withdraw its troops, a complaint would be filed with the United Nations.

"In case we have not received any positive signs before the deadline we set for the Turkish side, then we maintain our legal right to file a complaint to the [UN] security council to stop this serious violation to Iraqi sovereignty," said Iraqi government spokesman Saad al-Hadithi, according to the Guardian.

Turkey’s actions were also condemned by the Arab League, which described the troop buildup as "blatant intervention." Nabil Elaraby, Secretary-General of the Arab League, released a statement saying that his organization would also support Iraq’s appeal to the UN Security Council.

Even the United States, one of Turkey’s key allies, has stressed that it does not support troop deployments on Iraqi territory without the consent of the central government.

While Turkey is ostensibly in Iraq to fight Daesh, also known as ISIL/The Islamic State, Ankara has, in actuality, been more focused on combating Kurdish militias. Russia has presented evidence that Turkey benefits directly from Daesh’s illegal oil trade, and thus has little interest in eliminating the terrorist group.

On Friday, Iran also said it has "irrefutable evidence" of Turkey’s involvement in illegal oil smuggling.

Ankara has faced intense criticism since the downing of a Russian bomber along Turkey’s Syrian border. An unprovoked attack, the incident left two dead.

000000
Popular comments
Apply for Russian assistance and a salvo of cruise missiles will solve the Turkish occupation.

Mikhas
7 December 2015, 23:37 GMT11
000000
Well there is nothing much to talk about the and involve the U.N if they have not left the country by the deadline send in the military and the airforce and bomb the hell out of them.