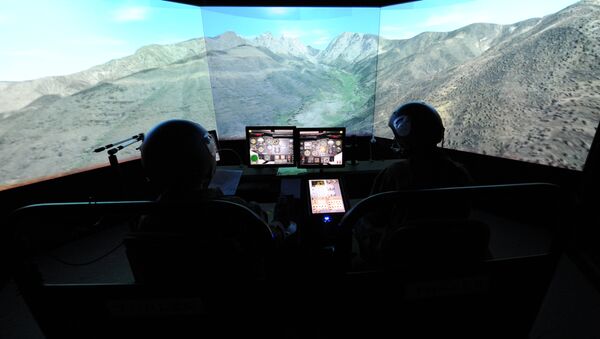 © AFP 2021 / IROZ GAIZKA
Subscribe
Militants in Libya have obtained small jets and flight simulators, which they can use to train basic skills of how to pilot aircraft, US media reported. And as some analysts claimed, this is enough for them to carry out 9/11 attacks like there was in the US.

At least one flight simulator and several small planes captured after the ousting of country's president Muammar Gaddafi are in the hands of militants at the moment. According to Erik Burkhart, a former CIA agent, this means that there is threat that the militants could conduct terror attacks like those that occurred in the US on September, 11, 2001.

"We're talking about very basic, rudimentary pilots who can take off in a light plane and crash themselves into the Vatican, for instance. It takes only an hour and a half to cross [the Mediterranean Sea] from Libya to Rome," Neriah told Fox News.

Earlier this week Asharq al-Awsat newspaper reported referring to sources in Libyan military that a terrorist organization had "a brand-new aircraft training simulator" that was possibly shipped to the country from abroad in October. The hardware is equipped with a radar screen and device for communication with traffic controllers.

Daesh Suffers Financial Difficulties – Report
Since the overthrow and assassination of Muammar Gaddafi during the conflict of 2011, Libya has descended into a period of harsh crisis. A split regime has appeared in the country, represented by a publicly elected parliament that holds its meetings in the city of Tobruk and by the General National Congress based in Tripoli.

Moreover, a row of territories in Libya is out of central authorities' control. The UN has noted that amid multiple violations of law and order in various Libyan regions, groups affiliated with Daesh have claimed several territories.

In late November the Wall Street Journal cited sources in Libyan intelligence saying that the number of Daesh militants had reached five thousand. There were also reports of creation of a new military base on the coastal city of Sirte.

000000
Popular comments
It is only a short trip across the sea and France can cop it again.
6 December 2015, 10:35 GMT
000000
These monkeys supposedly got this stuff from the people who took Libya. Who was responsible for overthrowing Mr. Gadaffi and destroying Libya? Hilary Clinton. Remember her quote about him? "We came, we saw, he died." It is odd that Mr. Neriah, an occupier of Palestine, should suggest the Vatican as a target for his group of terrorists. Many prophesy from the time of the first pope on up to the 1800's describe the fall of the Vatican and the escape of the last pope in such detail as to suggest men who look, act and smell like ISIL carried out the attack.