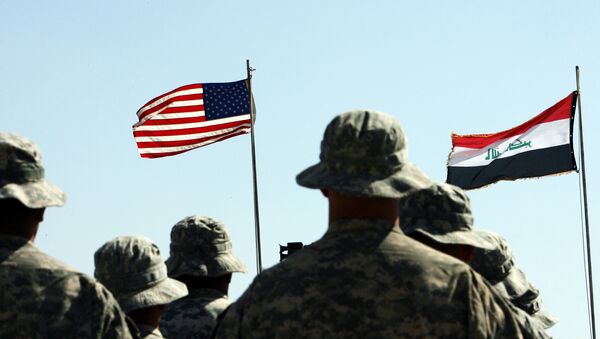 Ibrahim ar-Rokabi, a member of the “Kutlat Dawlat al-Qanoun” Party in the Iraqi Parliament spoke to Sputnik about the US ground troops in Iraq and the Iraqi Prime Minister’s refusal to accept interference by any foreign forces.

“When the United States became aware that the Iraqi people are living under the pressure of the Iraqi Government of al- Abadi and that we want the support of the Russian Army in fighting and exterminating Daesh – either by air force or else — the United States, hence, came up with an initiative of sending its ground forces to deploy them in Iraq,” ar-Rokabi told Sputnik in an exclusive interview.

Shiite Militias Threaten to Fight US Special Forces in Iraq
He further said that he believes what concerns the US is that if Iraqi Prime Minister Haider al-Abadi refused the intervention of any foreign troops in Iraq then why does he accept Russian support to fight Daesh in Iraq.

Still, sending American ground troops to Iraq has generated a lot of reaction and Rokabi said, “This will become a very critical situation for the United States and its forces.

This is because there will be a rejection not only from “Hezbollah”, “Popular Mobilization Forces” and other factions in the country, to the extent that the United States will be refused to enter Iraq and have its bases in Iraq; it will face loss and perdition.”

Regarding the statements of the Iraqi Prime Minister Rokabi said, “Mr. al-Abadi made such a declaration and perhaps it was previously agreed on with the United States. Perhaps it was agreed behind the scene, so that there won’t be a chance… because the Iraq Coalition Parliament agreed on Russian support to fight Daesh in Iraq.”

“This declaration will prevent the chance of carrying out the will of the Parliament because al-Abadi said he won’t accept any interference of any foreign forces in Iraq. We [the Iraq people] have demanded many times the Iraqi Government and the Parliament for a Russian intervention in Iraq, or so that Russia be present on the Iraqi lands, to fight Daesh.”