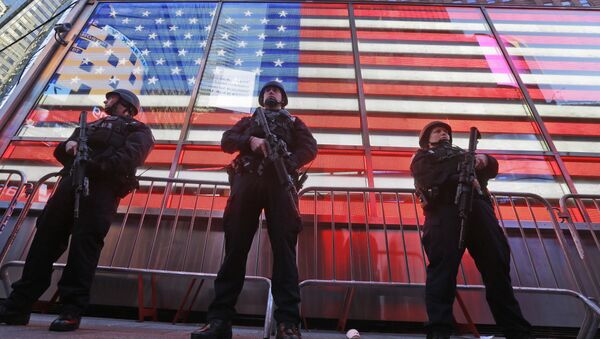 © AP Photo / Mary Altaffer
Subscribe
A majority of US voters see homegrown extremist violence as a greater threat than potential jihadists infiltrating the ranks of Syrian refugees, a poll released on Thursday showed.

WASHINGTON (Sputnik) – Some 58 percent of voters in the United States said homegrown jihadists present a greater threat than refugees, according to the Quinnipiac University Poll. In contrast, 16 percent of respondents said terrorists hiding among refugees were a greater threat.

"Americans are far more concerned about the threat from within, homegrown terrorists, than they are about someone being welcomed to the US as a refugee and committing an act of terror," Quinnipiac University Poll Assistant Director Tim Malloy said.

Malloy argued that voters are aware of "meticulous" vetting processes that Syrian asylum seekers face before being accepted as refugees. The US State Department says the average processing time from a UN Refugee Agency referral to arrival to the US is 18-24 months.

UN Urges US Politicians to Stop Blaming Syrian Refugees for Terrorism
The poll was released against the backdrop of another mass shooting in the United States, where a couple armed with semi-automatic rifles killed at least 14 people at a staff party for a San Bernadino, California, disabled social services clinic.

The armed attackers, who were later killed in a shootout with police, were identified as Syed Rizwan Farook, 28, and Tashfeen Malik, 27. Authorities do not rule out terrorism as a possible motive of the mass shooting.

Over 30 state governors have expressed opposition to US President Barack Obama’s proposal to accept 10,000 Syrian refugees in the United States, despite a lack of authority to enforce these decisions.

Fears of extremist elements hiding among Syrian refugees resurfaced after a reportedly forged Syrian refugee passport was found near the body of one of the November 13 Paris suicide bombers. The passport holder was said to have been registered upon arrival in Greece in October, then formally requested asylum in Serbia before traveling to Croatia, Hungary and Austria.

ISIL Threat, Terrorism is the Main Cause of the Ongoing Refugee Crisis
© Sputnik
000000
Popular comments
US is the only country in the world where you have so many random people shoot other people for no reason. It makes you wonder if the CIA is involved or not
Tactical Investor
3 December 2015, 17:11 GMT
000000
The US government media constantly spews out propaganda like this article and then wonders why nobody trusts the "system". A knife has nothing to do with gun violence, but there are strict knife laws in many states. It's about disarming people. I'm supposed to trust a government that clearly supports terrorists in Syria??
jas
3 December 2015, 17:22 GMT
000000
Newsfeed
0
New firstOld first
loader
LIVE
Заголовок открываемого материала
Access to the chat has been blocked for violating the rules . You will be able to participate again through:∞. If you do not agree with the blocking, please use the feedback form
The discussion is closed. You can participate in the discussion within 24 hours after the publication of the article.
To participate in the discussion
log in or register
loader
Chats
Заголовок открываемого материала
Worldwide
InternationalEnglishEnglishMundoEspañolSpanish
Europe
DeutschlandDeutschGermanFranceFrançaisFrenchΕλλάδαΕλληνικάGreekItaliaItalianoItalianČeská republikaČeštinaCzechPolskaPolskiPolishСрбиjаСрпскиSerbianLatvijaLatviešuLatvianLietuvaLietuviųLithuanianMoldovaMoldoveneascăMoldavianБеларусьБеларускiBelarusian
Transcaucasia
ԱրմենիաՀայերենArmenianАҧсныАҧсышәалаAbkhazХуссар ИрыстонИронауОssetianსაქართველოქართულიGeorgianAzərbaycanАzərbaycancaAzerbaijani
Middle East
Sputnik عربيArabicArabicTürkiyeTürkçeTurkishSputnik ایرانPersianPersianSputnik افغانستانDariDari
Central Asia
ҚазақстанҚазақ тіліKazakhКыргызстанКыргызчаKyrgyzOʻzbekistonЎзбекчаUzbekТоҷикистонТоҷикӣTajik
East & Southeast Asia
Việt NamTiếng ViệtVietnamese日本日本語Japanese俄罗斯卫星通讯社中文（简体）Chinese (simplified)俄罗斯卫星通讯社中文（繁体）Chinese (traditional)
South America
BrasilPortuguêsPortuguese
NewsfeedBreaking
04:03 GMTWitness Who Claims She Saw Prince Andrew Dancing With Giuffre at Club to Testify in Court - Report
03:24 GMTBennett Claims He Said 'No Three Times’ to President Biden During Their August Meeting
03:16 GMTRepublicans Slam DHS Chief Mayorkas for Allowing Thousands of Haitians Into US
01:37 GMTUS ‘Humiliated Like Never Before’, Trump Says, After DHS Allowed Thousands of Migrants to Pour in
01:31 GMTLockheed Martin to Build US Army’s Next Generation Tactical Vehicle Based System
01:10 GMTBorder Patrol Agents Disgruntled Over Biden's Attempts to Throw Them 'Under the Bus' - Report
00:53 GMTBeard-Check: Afghan Barbers Banned From Shaving, Trimming Beards - Reports
00:27 GMTR. Kelly Found Guilty: Will Artist Be Removed From Music Services?
00:03 GMTIs Sir Alex Ferguson Right, That Ronaldo, and not Messi, Could Score a Hat-trick for Anyone?
00:00 GMTUS Senator Menendez Urges New Sanctions on Turkey if It Acquires More Russian Weapons
YesterdayInsurgents Who Detained President of Guinea Declare Transitional Charter - Reports
YesterdayTexas Lawmakers Propose New Congressional Districts in Cities of Austin, Houston
YesterdayIOM Looking for Alternatives for Haitians at US Border, Brazil Being 1 Option - Sources
YesterdayCzech Republic Will Purchase Israeli-Made Air Defenses to Replace Soviet Gear
YesterdaySPD Leader Scholz Says Yet to Hear Congratulations From CDU/CSU Rival
YesterdayTaliban Say Norwegian NGO Promises to Ship Humanitarian Aid to Afghanistan This Winter
YesterdayUS Blue-Chip, Tech Stocks Fumble on Worries of Rate Hike
YesterdaySerbian Troops Monitoring Situation at de-Facto Serbia-Kosovo Border Amid Protests
YesterdayUnidentified Man Threatens Journalist, France's Potential Would-Be President Eric Zemmour - Reports
YesterdaySenate Republicans Vote to Block Gov't Funding, Debt Limit Bill Just Days Ahead of Shutdown Deadline