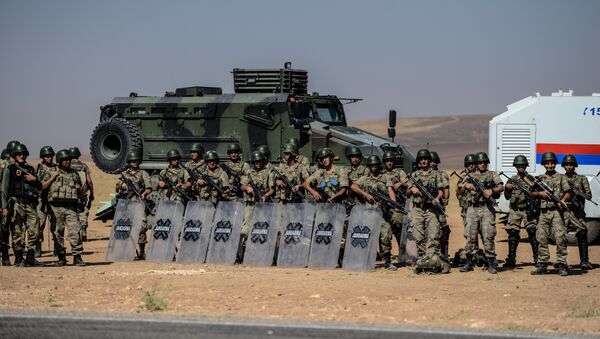 Prime Minister said that Turkey and its coalition partners are taking measures to clear the Turkish-Syrian border from the Daesh terrorists.

“Ninety-eight kilometers [around 60 miles] of our border with Syria is under Daesh control. Along with our coalition, we are taking measures to clear the border from Daesh militants and will do everything possible to push them out. We will close the border for militants and leave it open for refugees,” Davutoglu said during a press conference in the Ankara Airport before leaving for an official visit to Azerbaijan.

The Turkish territory is widely used by Daesh recruits to reach Syria to join jihadists.

On Tuesday, US President Barack Obama said that despite some progress made in sealing off Syria-Turkey border some gaps still remained. Later in the day, US Defense Secretary Ashton Carter said that Turkey should do more to control its border with Syria.

On Wednesday, the head of the Russian General Staff’s operative command Lt. Gen. Sergei Rudskoy said that oil from IS-controlled areas in Syria was transported to Turkey and shipped to refineries in third countries.