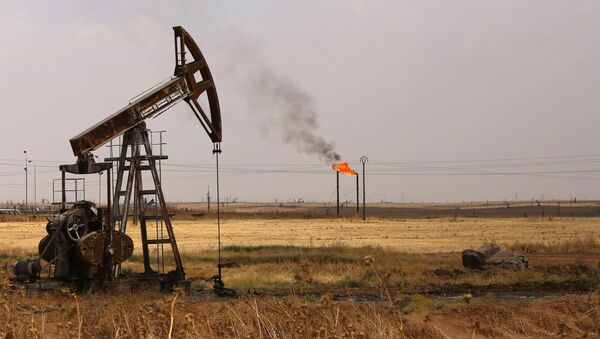 The oil produced by Daesh (group also known as ISIL or the Islamic State) is definitely being smuggled to Turkey, according to Deutsche Welle.

We Know Who Benefits From Oil Smuggling Operations in Turkey - Putin
DW points out that in 2014, similar accusations were brought up on several occasions. For example, in June 2014 Ali Ediboglu, a representative of the Turkish Republican People’s Party (CHP) said that by that time Turkey had purchased a total of $800 million worth of oil from territories controlled by Daesh.

In August 2014 the Turkish daily Taraf reported that about 1,500 metric tons of fuel from Syria is being smuggled to Turkey every day.

According to DW, in early 2015 two scientists from the University of Greenwich, George Kiourktsoglou and Alec D. Coutroubis, published a study on Daesh oil smuggling.

According to the data they’ve obtained, about 45,000 barrels of oil per day were being produced  in the Daesh-controlled territories in February 2015, thus earning the Islamist militants up to $3 million worth of revenues daily.

DW adds that this study reveals why the international coalition is so reluctant to deal with Daesh oil smuggling, as too many influential people are involved in that shady trade.

"Daesh controls oil wells but doesn’t control oil pipelines in seaports, so the group can only smuggle oil by land via tanker trucks," he explained. "Selling oil from wells controlled by Daesh is one of the chief sources of income for the terrorists. The trade is being conducted through intermediaries who masquerade as engineering companies or firms dealing in oil and other natural resources."

"Neither France nor the UK, Italy of the US deliberately buy oil or minerals from Daesh, but it is clear that allegedly legal intermediary groups conduct illegal commercial activity by introducing oil and other valuable commodities into the global market," Pansa added. "Unfortunately, by purchasing these commodities we may be inadvertently funding Daesh without even realizing it."