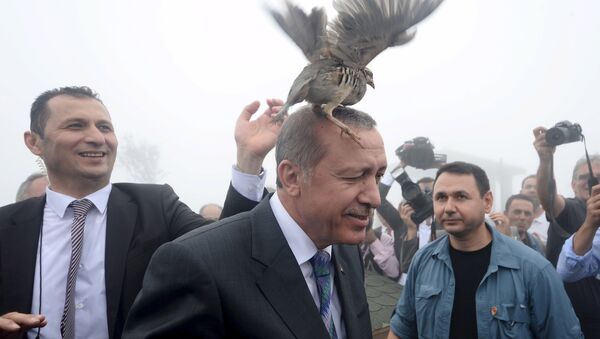 Russia
Vladimir Putin Delivers Annual State of the Nation Address (VIDEO)
Russia's president said: "We were ready to cooperate with Turkey on any sensitive issue and were ready to go much further than [Turkey's other] allies were willing to. "

Earlier, on Monday, Russian President Vladimir Putin said Russia had received additional evidence that oil from fields controlled by Daesh, which is prohibited in Russia, were being transported to Turkey on an industrial scale.

"Only Allah knows, why they did it," Putin said.

Turkish President Recep Tayyip Erdogan and his family are involved in the illegal deliveries of oil from the Islamic State, known in the Arab world as Daesh and whose activities are prohibited in Russia, Russian Deputy Defense Minister Anatoly Antonov said earlier Wednesday.

​"It's the duty of every civilized country to take part in the defeat of terrorists," Vladimir Putin said.

Moscow has been conducting pinpoint airstrikes on terrorist positions, particularly those of Islamic State, in Syria at President Bashar Assad's request since September 30.

On November 24, a Russian Su-24 attack aircraft was downed by an air-to-air missile while carrying out precision strikes against terrorist positions in northern Syria. The missile was fired by a Turkish F-16 fighter in response to an alleged violation of Turkish airspace by the Russian jet.

"I do not understand why they did it. Any problem — even that which we might have missed — could have been dealt with in a different way," Russia's president stressed.

Both the Russian General Staff and the Syrian Air Defense Command have confirmed that the Su-24 never crossed into Turkish airspace and was illegally downed on Syrian territory In the wake of the incident, Russia introduced a set of economic measures against Turkey, while Ankara has refused to apologize for the move.

Russia has a lot of longtime and trusted friends in Turkey, who should know that Moscow does not equate them to the Turkish government, according to Putin.