All Syrian Opposition Groups Should Participate in Vienna Talks – Lavrov 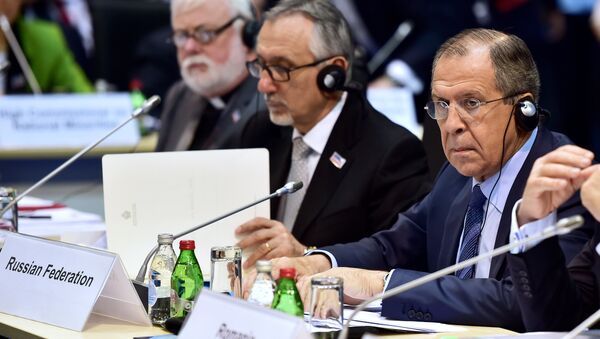 © AFP 2021
Subscribe
Russian Foreign Minister Sergei Lavrov said that Vienna talks on Syria crisis settlement should be held with the participation of all Syrian opposition groups.

"As far as Syria is concerned, it is pointless to count on progress achieved without the implementation of the agreements reached in Vienna on clarifying the list of terrorist organizations to be destroyed," Lavrov said.

According to the minister, "it is inadmissible to continue to divide terrorists into bad and acceptable."

"There must be a delegation of the Syrian government representatives and the whole spectrum of the patriotic opposition rejecting violence and extremism," the minister said, speaking at an Organization for Security and Co-Operation in Europe (OSCE) session in Belgrade.

A sustainable settlement in Syria is impossible without an agreed single list of terrorist organizations operating in the country, Lavrov added.

"And of course there can be no justification for attempts to derail the anti-terrorist struggle by military protection of terrorists from retaliation, as it happened in the skies over Syria on November 24 [when a Russian Su-24 bomber was downed by Turkey]," the foreign minister said.

Lavrov in his speech at the OSCE session also expressed his condolences to US State Secretary John Kerry in connection with the recent events in California, when at least 14 people died and 17 were injured in a shooting attack on a healthcare facility providing free services to people with disabilities on Wednesday.

At the first round of Vienna talks in late October, international mediators worked out a nine-point plan on ending the Syrian civil war, including a definition of national unity, the defeat of extremist groups and assistance to refugees.

During the second round of the talks, held on November 14, the mediators agreed to the upholding of the 2012 Geneva communique on reaching a political solution to the Syrian civil war. The participating states also set a six-month timeframe for Syria to form an interim unity government, while stipulating that elections in Syria should be held within 18 months.

000000
Popular comments
The West is attempting to derail the aim of the establishment of peace in Syria,that's why the West do not want to issue a full list of opposition groups because most of them are terrorists. The Vienna talks will not reach a solution to the crisis in Syria. The solution to Syria will come without Vienna and it will be on the field
3 December 2015, 17:34 GMT
000000
Newsfeed
0
New firstOld first
loader
LIVE
Заголовок открываемого материала
Access to the chat has been blocked for violating the rules . You will be able to participate again through:∞. If you do not agree with the blocking, please use the feedback form
The discussion is closed. You can participate in the discussion within 24 hours after the publication of the article.
To participate in the discussion
log in or register
loader
Chats
Заголовок открываемого материала
Worldwide
InternationalEnglishEnglishMundoEspañolSpanish
Europe
DeutschlandDeutschGermanFranceFrançaisFrenchΕλλάδαΕλληνικάGreekItaliaItalianoItalianČeská republikaČeštinaCzechPolskaPolskiPolishСрбиjаСрпскиSerbianLatvijaLatviešuLatvianLietuvaLietuviųLithuanianMoldovaMoldoveneascăMoldavianБеларусьБеларускiBelarusian
Transcaucasia
ԱրմենիաՀայերենArmenianАҧсныАҧсышәалаAbkhazХуссар ИрыстонИронауОssetianსაქართველოქართულიGeorgianAzərbaycanАzərbaycancaAzerbaijani
Middle East
Sputnik عربيArabicArabicTürkiyeTürkçeTurkishSputnik ایرانPersianPersianSputnik افغانستانDariDari
Central Asia
ҚазақстанҚазақ тіліKazakhКыргызстанКыргызчаKyrgyzOʻzbekistonЎзбекчаUzbekТоҷикистонТоҷикӣTajik
East & Southeast Asia
Việt NamTiếng ViệtVietnamese日本日本語Japanese俄罗斯卫星通讯社中文（简体）Chinese (simplified)俄罗斯卫星通讯社中文（繁体）Chinese (traditional)
South America
BrasilPortuguêsPortuguese
NewsfeedBreaking
16:49 GMTYoung Chinese Student Recounts Panicked Escape From Dormitory During Earthquake
16:41 GMTUnexpected Reason Why Manchester United Talisman Cristiano Ronaldo Swapped Mansions in England
16:39 GMTPiers Morgan to Headline News UK's Copycat Rival to RT and GB News Next Year
16:30 GMTBread and Circuses! Adorable Quokka Enjoys Juggling Show
16:24 GMTSeveral Rockets Reportedly Hit Kabul, Could Strike Power Plant
16:09 GMTTrump Says Americans Won’t ‘Have a Country Left in Three Years’
15:46 GMTIraqi Asylum Seeker Jailed After UK CCTV Operator Spots Him Raping Unconscious Woman on Seafront
15:36 GMTPentagon Contract Seeks Alternate GPS Using Low Earth Orbit Satellites
15:27 GMTRuckus Over AUKUS
15:26 GMTUS Regulator Approves Creation of Nuclear Dump in Texas Despite Opposition From Local Authorities
15:23 GMTRussian Gov't Allocates $60Mln to Produce Soyuz Spacecraft for Tourist Flights
15:17 GMTSyrian Kurdish Leader Discussed Turkish Attacks During Moscow Visit, SDC Says
15:07 GMTEU Commission Chief Announces Launch of Competitor to China’s Belt and Road
14:51 GMTEU Not Informed About New US, UK & Australia Alliance, Plans ‘to Assess Implications’
14:48 GMT'BJP's Politics Behind 96% Jump in Communal Riots in India', Says Opposition Congress
14:46 GMT‘No Friend of China’: As Raab Exits Stage Left, What Will UK Foreign Policy Look Like Under Truss?
14:34 GMTSouth African Child Maintenance Payments Delayed by Ransomware Attack
14:34 GMTEuropean Gas Futures Fall Below $750 Per 1,000 Cubic Meters
14:29 GMTIs the Age of the Car Over as Politicians Around Europe Declare War on the Motorist?
14:29 GMTMessage for India? AUKUS Announcement Sparks Debate About Relevance of Quad, Reliability of US