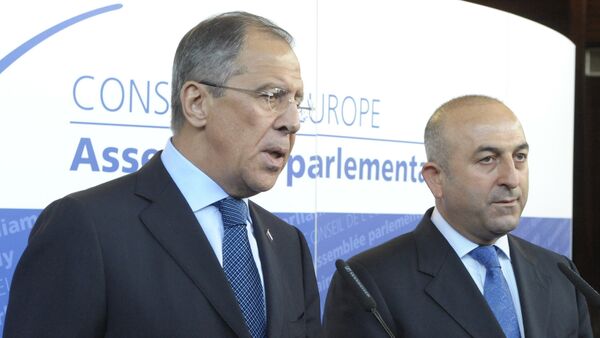 According to a source in the Russian delegation, Sergei Lavrov and Mevlut Cavusoglu will hold a breif meeting on Thursday.

BELGRADE (Sputnik) – Russian Foreign Minister Sergei Lavrov will meet with Turkish Foreign Minister Mevlut Cavusoglu on the sidelines of the Organization for Security and Co-operation in Europe Foreign Ministers session in Belgrade on December 3, a source in the Russian delegation said Thursday.

“Following numerous requests from the Turkish side, Sergei Lavrov agreed to hold a brief meeting with the head of the Turkish Foreign Ministry on December 3 on the sidelines of the OSCE Foreign Ministers session in Belgrade,” the source said.

Russia to Provide Proof of Turkey Involvement in Terrorist Oil Trade to UN
Lavrov is also expected to meet with US Secretary of State John Kerry and with his Serbian and Turkish counterparts Ivica Dacic and Mevlut Cavusoglu respectively, on the sidelines of the conference.

Serbia, which currently chairs the OSCE, is organizing the two-day Ministerial Council conference. The annual conference provides the foreign ministers of the 57 OSCE participating states with an opportunity to assess the organization's activities during the past year and to work out stances on global security issues.