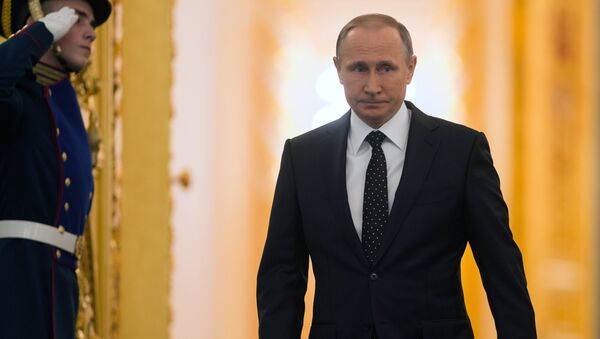 The fight against international terrorism, which Russia is familiar with only too well, was the core of President Putin’s State of the Nation Address. Russia is fully capable of defeating it, but in its fight it should have respect for itself and know its own value. Here are the highlights of the president’s speech.

This was President Putin’s twelfth annual State of the Nation Address to Russian MPs and dignitaries, but probably one of the most emotional ones, being delivered so close to the heinous shootdown of a Russian bomber in Syrian airspace and preceding air crash of the Russian passenger plane in Egypt.

'Allah Decided to Punish Turkey Leaders By Making Them Lose Their Minds'
The solemnity of the speech was emphasized by the location – the St George’s Hall of the Moscow Kremlin, a historic hall of Russian military glory.

The president started with words of gratitude to all the Russian servicemen who are fighting international terrorism, directly addressing the combat pilots and representatives of the Armed Forces currently taking part in the anti-terrorist operation who were invited into the Kremlin.

The president asked everyone to honor the memory of the soldiers who gave up their lives while fulfilling their duty and all Russian citizens who fell at the hands of terrorists with a moment of silence. 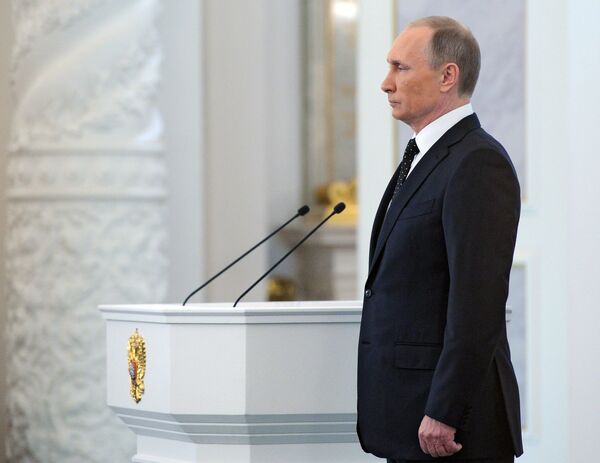 Later in his speech the president returned to this incident and bluntly blamed the Turkish authorities who are directly responsible for the deaths of our servicemen in Syria.

“We will never forget their collusion with terrorists,” he assured. “We have always deemed betrayal the worst and most shameful thing to do, and that will never change. I would like them to remember this – those in Turkey who shot our pilots in the back, those hypocrites who tried to justify their actions and cover up for terrorists.”

“I don’t even understand why they did it. Any issues they might have had, any problems, any disagreements we knew nothing about could have been settled in a different way. Plus, we were ready to cooperate with Turkey on all the most sensitive issues it had; we were willing to go further, where its allies refused to go.” 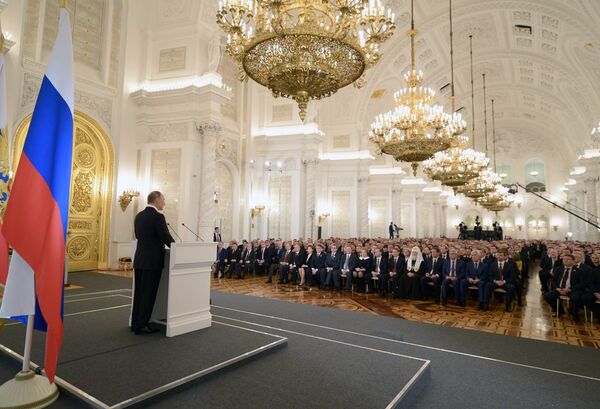 “Allah only knows, I suppose, why they did it. And probably, Allah has apparently decided to punish the ruling clique in Turkey by taking their sanity.”

However the Russian leader ruled out any hasty reaction from Russia despite the hurt it still feels.

“But, if they expected a nervous or hysterical reaction from us, if they wanted to see us become a danger to ourselves as much as to the world, they won’t get it. They won’t get any response meant for show or even for immediate political gain. They won’t have it.” 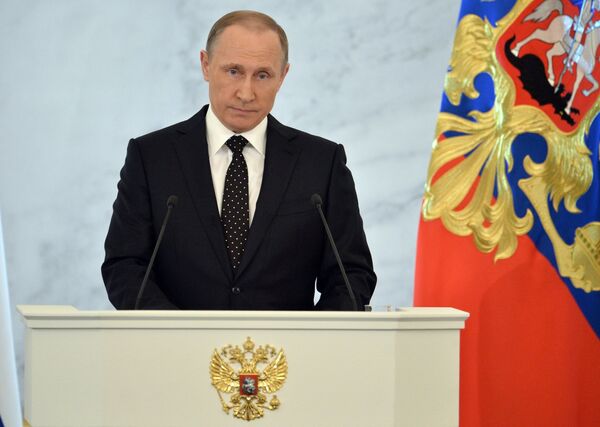 “Our actions will always be guided primarily by responsibility – to ourselves, to our country, to our people. We are not going to rattle the sabre. But, if someone thinks that while committing war crimes, killing our people they will get away with some tomato [import ban], or a few restrictions in construction or other industries, they’re profoundly mistaken. We’ll remind them of what they did, more than once. They’ll regret it. We know what to do.”

Meanwhile, President Putin stressed again that his words were aimed only at the country’s ruling elite and have nothing to do with ordinary Turks.

“Meanwhile, the Turkish people are kind, hardworking and talented. We have many good and reliable friends there. Allow me to emphasize that they should know that we do not equate them with the authorities that are directly responsible for the deaths of our servicemen in Syria.” 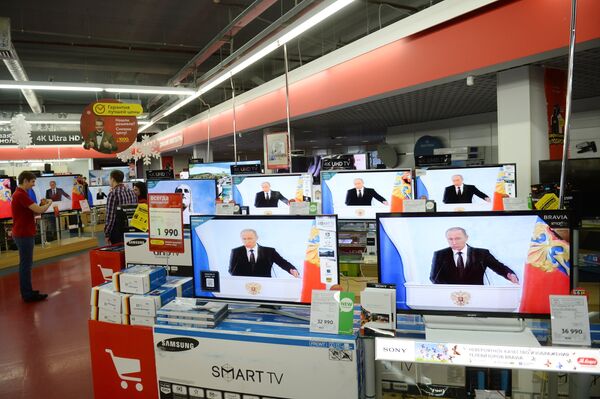 The live broadcast of Russian President Vladimir Putin's Presidential Address to the Federal Assembly at an M.Video electronics store in Moscow
© Sputnik / Pavel Lisitsyn
/
Go to the photo bank

‘The evil is still out there.’

President Putin paid a special attention to Russia’s fight against international terrorism stressing that Russia unfortunately is only too familiar with what it is.

“Russia has long been at the forefront of the fight against terrorism. This is a fight for freedom, truth and justice, for the lives of people and the future of the entire civilization.”

“We know what aggression of international terrorism is. Russia faced it back in the mid-1990s, when our country, our civilian population suffered from cruel attacks. We will never forget the hostage crises in Budyonnovsk, Beslan and Moscow, the merciless explosions in residential buildings, the Nevsky Express train derailment, the blasts in the Moscow metro and Domodedovo Airport,” he reminded. 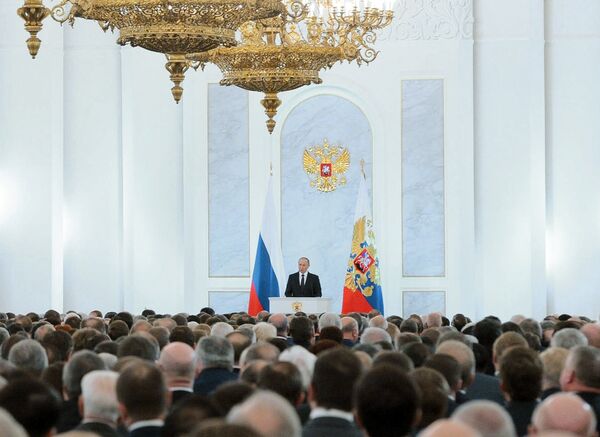 Russia has almost succeeded in expelling terrorists from the country, he said, but it is still fighting the remaining terrorists underground. This evil is still out there.

International terrorism will never be defeated by just one country, especially in a situation when the borders are practically open, and the world is going through another resettlement of peoples, while terrorists are getting regular financial support.

‘Terrorism is a growing threat today.’

The president stressed that the Afghanistan problem has not been resolved. The situation there is alarming and gives no optimism, while some of the relatively peaceful and stable countries in the Middle East and North Africa – Iraq, Libya and Syria – have now plunged into chaos and anarchy that pose a threat to the whole world.

“We all know why that happened. We know who decided to oust the unwanted regimes and brutally impose their own rules. Where has this led them? They stirred up trouble, destroyed the countries’ statehood, set people against each other, and then “washed their hands”, as we say in Russia, thus opening the way to radical activists, extremists and terrorists.” 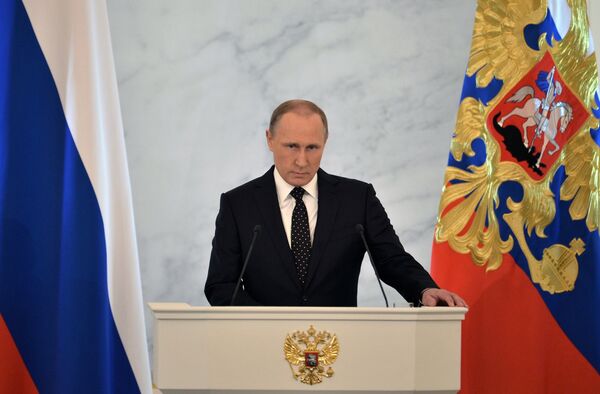 The militants in Syria, he stressed, pose a particularly high threat for Russia. Many of them are citizens of Russia and the CIS countries. They are issued money and weapons and are accumulating strength. If they get sufficiently strong to win there, they will return to their home countries to sow fear and hatred, to blow up, kill and torture people. Thus Russia must fight and eliminate them there, away from home.

‘The international community should have learned from the past lessons.’

“Unwillingness to join forces against Nazism in the 20th century cost us millions of lives in the bloodiest world war in human history.”
“Today we have again come face to face with a destructive and barbarous ideology, and we must not allow these modern-day dark forces to attain their goals.” 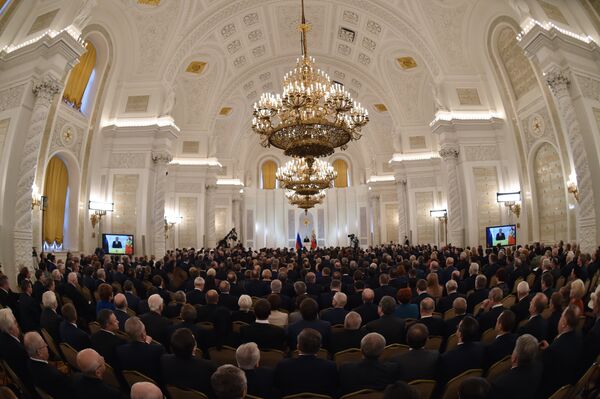 Russian President Vladimir Putin (C back) delivers his annual state of the nation address at the Kremlin in Moscow on December 3, 2015
© AFP 2022 / KIRILL KUDRYAVTSEV

Every civilized country, he stressed, must contribute to the fight against terrorism, reaffirming their solidarity, not in words but through their actions.

“This means that the terrorists must not be given refuge anywhere. There must be no double standards. No contacts with terrorist organizations. No attempts to use them for self-seeking goals. No criminal, bloody business with terrorists.”

“We know who are stuffing pockets in Turkey and letting terrorists prosper from the sale of oil they stole in Syria. The terrorists are using these receipts to recruit mercenaries, buy weapons and plan inhuman terrorist attacks against Russian citizens and against people in France, Lebanon, Mali and other states.”

The Russian leader stressed that the country has mobilized its Armed Forces, security services and law enforcement agencies to repel the terrorist threat. Everyone must be aware of their responsibility, including the authorities, political parties, civil society organizations and the media.

“Russia’s strength lies in the free development of all its peoples, its diversity, the harmony of cultures, languages and traditions, mutual respect for and dialogue between all faiths, including Christians, Muslims, Judaists and Buddhists.” 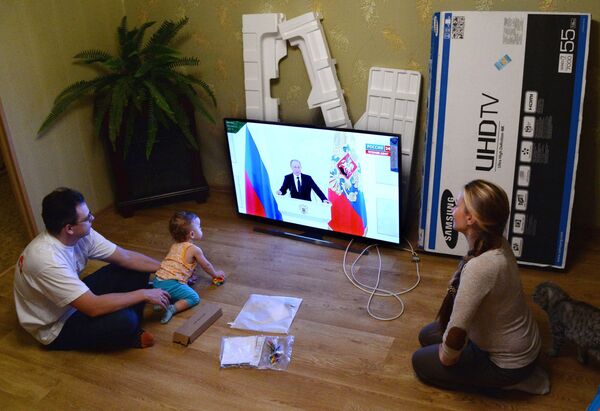 “We must firmly resist any manifestation of extremism and xenophobia while defending our ethnic and religious accord, which is the historical foundation of our society and the Russian statehood.”

President Putin urged Russians to unite and “know their value.”

“Those who have no respect for themselves cannot hope to be respected by others. That does not mean that love for our homeland must blind us into saying that we are better than all others in everything we do. But Russians must know their value,” the president quotes a famous Russian historian Nikolai Karamzin.

However his words sound only too true nowadays.

The president also touched upon some internal issues: demography, health care, economy, business and other and came to the final conclusion:

“Russia has no right to be vulnerable. We must have a strong economy, excel in technology, and advance our professional skills. We must fully use our current advantages today as we are not guaranteed we will have them tomorrow.” 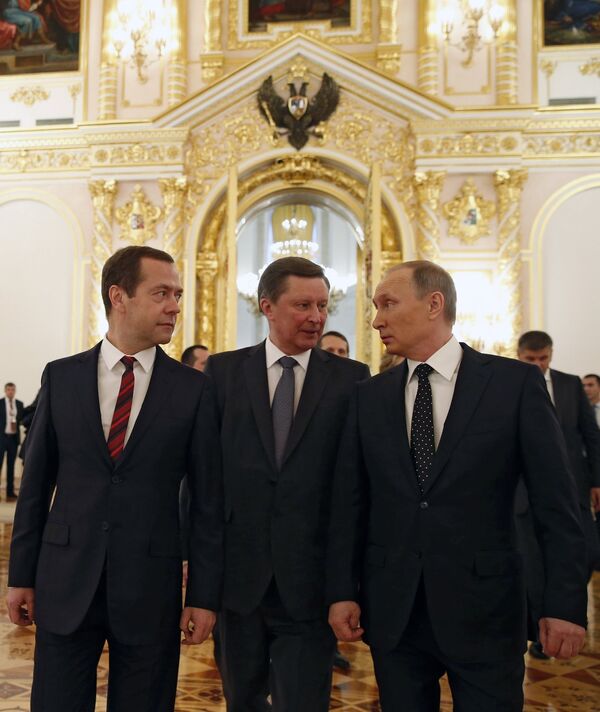 December 3, 2015. From right: Russian President Vladimir Putin, Chief of Staff of the Presidential Executive Office Sergei Ivanov and Prime Minister Dmitry Medvedev after Vladimir Putin's Presidential Address to the Federal Assembly at the Kremlin's St. George Hall
© Sputnik / Dmitry Astakhov
/
Go to the photo bank
Newsfeed
0
Access to the chat has been blocked for violating the rules . You will be able to participate again through:∞. If you do not agree with the blocking, please use the feedback form
The discussion is closed. You can participate in the discussion within 24 hours after the publication of the article.
To participate in the discussion
log in or register
loader
Chats
Заголовок открываемого материала